Children of the Sun: Ofamfa 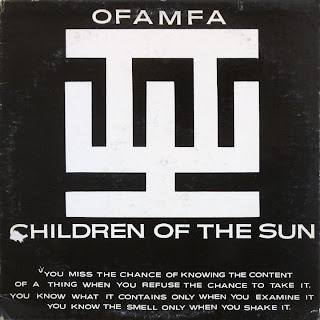 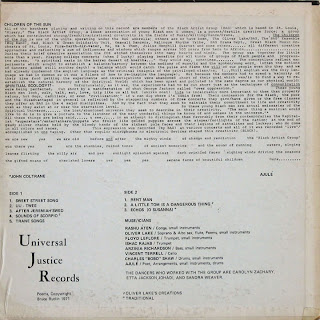 Here's another rarity - initially rescued from obscurity by the blog Reality Unit Concepts, whose description back in 2006 went as follows:

OFAMFA was the first of the releases put out by Universal Justice and the Black Artists’ Group (B.A.G.) collective out of St. Louis. Whereas the later releases of this loose-knit group might have some comparisons with mass-marketed music, OFAMFA is in the territory of unique recordings.

The track “Rent Man” might be the exception, and is very reminiscent of the album “Funky Donkey” by Luther Thomas. The rest is part spoken word, part rather inept but effortful jazz, and part collective free group improvisation. Depending on your state of mind, it is either brilliant next-level sound art, or an incomprehensible and bumbling train wreck. Or both. I always think to myself, I could just listen to the amp hum from an anonymous location in St. Louis some 35 years ago and be content.

One thing is for sure, there’s a good reason nobody else would release this. It makes John Coltrane sound like “Get on the Good Foot.” R-A-W. Even Arista avoided it when they raided the catalog to re-release “Under the Sun” and “Whisper of Dharma.” Hence, this is another entry in this blog’s catalog of un-loved recordings that still haven’t seen a proper digital release.

A couple years ago, I described Ofamfa as:

of interest to folks digging on some of the Black Artists Group & Human Arts Ensemble material I've posted on my blog - and of course it will be of interest to those who dig on what cats like Last Poets and Watts Prophets were doing back in the late 1960s and early 1970s.

In particular, the approach reminds me of Last Poets' album At Last - in other words think of it as jazzoetry.

In the credits, the following individuals are listed as "dancers who worked with the group": Carolyn Zachary, Etta Jackson, Johadi, and Sandra Weaver.

Note that tracks 4 and 7.a. are credited to Oliver Lake; track 7.b. is traditional. Poems copyright Bruce Rutlin, 1971. Released on Universal Justice Records.

Ajulé's liner notes are themselves a rather interesting read, offering something of a history lesson of a fertile period of jazz in the metropolitan St. Louis area:

All of the brothers playing and writing on this record are members of the Black Artist Group (BAG) which is based in St. Louis, "Misery." The Black Artist Group, a loose association of young Black men & women, is a potent/fertile creative force; a group which has contributed strong/fresh/inspirational creativity in the fields of Music/Writing/Dance/Drama. The Children of the Sun is one of the units operating under the BAG umbrella; others are or have been, The Oliver Lake/BAG, The 'BAG' Ensemble (Big Band), Red Black & Green Solidarity Unit, Onawali Dancers, Malinque Rhythm Tribe, BAG Drama Dept., Great Black Music Orchestra of St. Louis, Fire-Earth-Air-Water, Me We & Them, Julius Hemphill Quartet and some others.......all different creative approaches and reflecting a sum of influences and wisdoms which ranges across 500 years from here to Africa.......During their brief creative association the COS etched themselves into many hearts and minds. The group was together for little more than a year. Playing college concerts (when $ lucky), playing benefits for all kinds of groups of Black people and progressive whites. "A spiritual oasis in the baren desert of Amerika..." They would say, sometimes...... The conceptions reflect experiments which sought to establish a balance/harmony between the mediums of muse/ic and the spoken/sung word, (often the motions of dancers added still another depth) a balance which would catch the pulse and flame of the will of our people even tho they and we had already condemned the english language as the criminal insignia of the privileged class/es. (...Still, english wuz the only language we had in common so it was a dilema of how to reinspire the language). But because the members had to spend a majority of their time food getting their experiments and investigations were abandoned short of their goal which was/is to find a way to restablish the natural harmony of the Spiritual World; which has been upset and polluted to the same extent as our physical world: SPIRITUAL ECOLOGY?? Unfortunately, as it was, the experiments had to be cut short just as the techniques of communication were being perfected. Cut short by a manifestation of whut George Jackson called "over oppression." These young Black men look, walk, talk, eat, love, trip like us all but (unlike most) life is incalcuably more important to them than property values, hot dogs, cadillacs, or even "civilization;" if u can dig where i'm comin from! Their compassion for the Black, the poor, and the disadvantaged in general is reflected by the staggering numbers of free concerts they give/have given or the free classes they offer at BAG in the 4 major disciplines. And by the fact that they seek to maintain their comittment to life and creativity even as they exist at or near the starvation level. So these young Black men are emissaries of the Spiritual Universe....... the lost/abandoned universe they seek to describe in their creativity. "The main thing a musician would like to do is to give a picture to the listener of the many wonderful things he knows of and senses in the universe."* All these things are being said ...... u see ...... in an attempt to distinguish them favorably from their contemporaries in the Kapitalist "superstars"/entertainers/puppets who frolic like gelded puppies across the stages/footlights of the nation; at the end of the silver gaudy chains held by the bloody hands of the richest pale faces and their legions of sattelites and lackeys; who do come in all colors and races. This expression was recorded (by BAG) at various concerts and all of it was recorded "live"/accomplished in one taping. Other than regular microphones no electronic devices shaped this creativity (BLACK).

we are new yes we are old before and after the mighty winds of change and revolution The "Black Artist Group" wuz there yes we are the shambles, ruined tones of ancient memories and the sound of running waters, singing leaves flirting the silly air and yes sunlight splashed against dark wrinkled faces sighed winds driving the seasons the gifted moans of cherished lovers yes yes yes serene faces of beautiful children Ours..........

All typos are solely mine. Ofamfa is worth checking out.