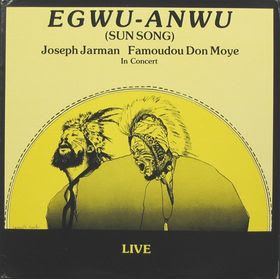 Egwu-Anwu (Sun Song) is an out-of-print live recording by Joseph Jarman and Famoudou Don Moye. Somehow I uploaded this album among others and never quite got around to posting it. The recording is of a live performance recorded in Woodstock, NY, which was released by India Navigation on January 8, 1978 (catalogue # IN 1033). The album was reissued on CD in the late 1990s before falling out of print. I occasionally encounter the mp3 files for Egwu-Anwu on the peer-to-peer networks.

If you're familiar with the AACM crew, you'll know what to expect: very free and spontaneous music characterized by lots of open space, generous use of "little instruments" (i.e., unorthodox objects in a jazz context such as conch shells and whistles), and just enough dissonance to keep you engaged but not so much as to wake up the kids - for me it's ideal night music. Folks who dig on Marion Brown and Leo Smith's Creative Improvisation Ensemble and Marion Brown and Elliott Schwartz's Soundways (see my post on those albums from two years ago) will find plenty to groove on here.

When I uploaded it, I did so in two parts, with the first three tracks on part one and the last four tracks on part two. I don't know who ripped this initially - but whoever it was did a fine job, and deserves mad props.