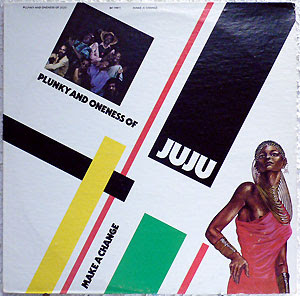 1980's Make a Change marks the completion of the transition Plunky Branch was making from avant-jazz (as was the case on his early 1970s band Juju) to radio-friendly R&B and funk. That's not to say that there aren't some jazzy moments, but the jazz takes a back seat on this outing. The title track even manages to work in some reggae influences. The track "Every Way But Loose" would become a minor hit in the clubs and on the R&B charts in 1982, and sends the message that in addition to becoming more aware, these cats want to make you partay! "Run Away Bay" and "Love's Wonderland" would be considered "smooth jazz" today. Many of the tracks remind me of what bands like Earth Wind & Fire were doing at the time. Jazz purists won't groove on this, but those who don't mind exploring something with an R&B edge will find plenty to love.

From the liner notes:

The Oneness of Juju speaks of the unity of our magic, the togetherness of our purpose and the universality of our roots.

This music bridges several groupings who have performed as a family making changes, collectively creating music.

This album is dedicated to all those who have given themselves to make and/or support this music.

Thank you all, Plunky

This album would be re-released two years later on Sutra as Every Way But Loose, with a different track sequence, and an instrumental version of the title track added.