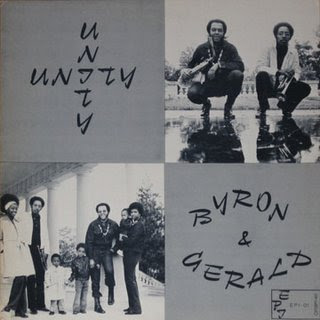 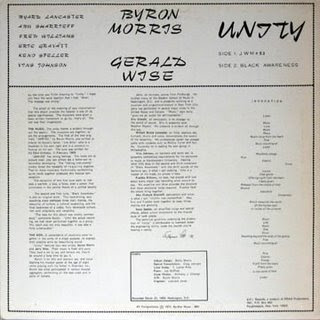 Here's another worth reposting. This album, Unity, was originally posted by the now apparently defunct Reality Unit Concepts in 2006. Here's how RUC described the album:

“The idea for this album was mostly spontaneous… until the actual recording, we had never performed together as a group. The result was not only beautiful, it was also a little unbelievable.” – Byron Morris
.

This is the album that Byron Morris put out in 1972, before “Blow thru your mind,” but bears little to no resemblance to any of his later albums. Recorded several years earlier in 1969, it is two sides of blistering, raw, unhinged jazz. . . .Also features an early appearance by two Philly artists who would later be frequently recorded: Byard Lancaster, who even contributes some Leon Thomas-esque yodels, and Keno Speller.

Here's the AMG review of Unity:

A few years before co-founding Unity with Vincent McEwan and Gerald Wise, Byron Morris co-led this rare 1969 date with Wise. Playing Unity next to the LPs that Morris recorded in the 1970s, one hears quite a contrast. The main focus of Morris' 1970s albums was a melodic, relatively accessible style of modal post-bop, whereas Unity favors abstract, uncompromising, mostly outside free jazz. The two instrumentals on this LP -- the 16-minute "JWM + 53" and the 23-minute "Black Awareness" -- aren't for the uninitiated. Like a lot of 1960s avant-garde jazz, Unity must be accepted on its own terms. And for those who do, the rewards are certainly there. The stream-of-consciousness approach serves Morris well, and he has very uninhibited company in Wise (trumpet), Byard Lancaster (soprano sax, flute, trumpet, drums), Vins Johnson (baritone and tenor sax), Freddie Williams (upright bass), Abu Richard Sharrieff (percussion), and Keno Speller (percussion). Unfortunately, this LP has long been out of print and is extremely difficult to find, so if by some chance you come across a copy somewhere, grab it immediately.