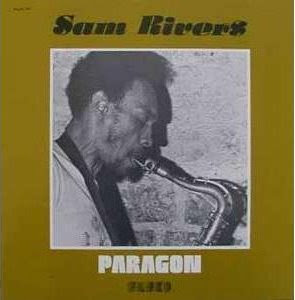 The titles should give you an idea of what to expect with this particular trio. "Ecstasy" is very much an ecstatic energy workout. "Bliss" captures Rivers on flute, and is musically quiet, as we would expect in a blissful state. "Rapture" goes back to a sax, bass, and drum format, and again the title sets the mood - very fluid, very fast-paced. Rivers switches to piano for "Tingle" which somehow manages to get the listener's senses tingling. Rivers becomes truly a multi-instrumentalist for "Paragon" - and all I can say is that if this is what perfection sounds like, I'm digging it. Drummer Barry Altschul and bassist Dave Holland were regular conspirators on Sam Rivers joints during the mid-1970s. On this one, they truly sound like they know each other well.

As the checks got smaller for jazz musicians, the bands did also. The fewer people to pay, the more profitable the venture. In some ways, this was a tragedy. For other musicians, men like Sam Rivers, it was an opportunity to make the music in his head. Rivers is a giant thinker. While his Blue Note recordings are certainly more accessible to the average listener, it is his remarkable trio output that is the core of his musical thought. Rivers is a player whose playing brooks no argument. There aren't many who can hang, even in a supporting role. There certainly isn't room for other soloists. This is sweeping, grand, muscular music, as regular and jagged as a seismograph, or the jittering of a lie detector. Here, he's supported by two men perfectly suited for their roles, Dave Holland and Barry Altschul. Fine musicians, here they are extensions of the music that pours from Rivers.

I'd like to think that Holland and Altschul are more than extensions of Rivers' music - not to diminish Rivers' accomplishments as an improvisor and composer, but to simply acknowledge that the music is a conversation, and the two sidemen involved are simply ones who happen to be fluent in the language Rivers speaks.