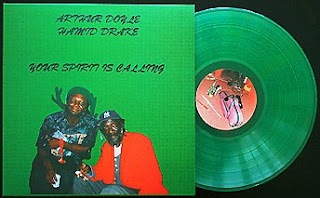 Your Spirit is Calling is an out-of-print limited very limited edition recording in which Doyle partners with legendary free jazz percussionist Hamid Drake. This was one of Qbico's early releases (catalogue # QBICO 15), recorded in 2003 and released the following year. It's as free-spirited as any of Doyle's recordings. The title track has a very angular sound and has Doyle on piano and voice and Drake on drums. "Noah Black Ark" is essentially a standard - as close to a standard as any obscure free jazz tune can be - in which Doyle sings and scats over some very swingin' drumming. "Flute and Drums" lives up to its title - with Doyle throwing in some scatting for good measure. Doyle finally picks up the sax for "Swing Low" which takes the duo into some noisefest territory (imagine Kaoru Abe on acid channeling Trane and Ayler in some sort of woulda-coulda-shoulda duo with Rashied Ali as a touchstone). "Jericho of Ballad" has Doyle back on the flute with Drake continuing to provide the sort of spirited drumming he played on the previous tune. "9th or 8th November" is another piece that is a standard from the Arthur Doyle canon - one that he's been recording in one form or another since the late 1970s. For this piece, Doyle is back to his trusty sax, singing and snarling through it like a man possessed. It's easily the fastest-paced tune of the set. The final piece, "Conga and Flute" is aptly named - ending the album on relatively mellow note, reminiscent of some of Don Cherry's work on Codona and similar outfits. Both musicians sound totally in sync with one another, making it worthy session to seek out.

A word about Doyle's singing is in order. When Arthur Doyle sings or scats, the vocals come across like the mumblings of a drunken skid row derelict. Given that the man has been to Hell and back, the impression I get is that this is very much an integral part of his artistry - a reflection of a side of life much of his audience would likely have no knowledge. Most of his vocalisms are imitative of the instruments he plays, reflecting the time spent in prison without access to a sax or flute - also keep in mind that philosophically he tends to view those instruments as extensions to the voice. The sound is unabashedly human, all too human, of a man pouring a lifetime's worth of emotions out there and demanding that those who happen to be in the vicinity deal with it. What one gets then is an experience that doesn't make for easy listening. Rather, it's some of the most beautifully abrasive stuff you'll likely hear, assuming you have sufficiently open ears.