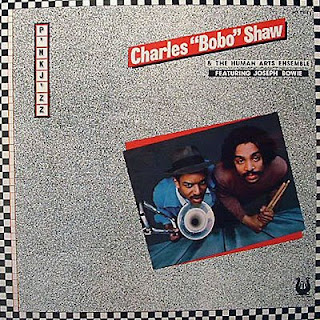 I wish I knew a bit more about this one. From what I can surmise, it was recorded around 1977, and released in 1981. The first track has a gritty, rockin' bass line, and a sound that would probably fit in with what the No Wave scenesters were digging on toward the end of the 1970s. Jacki Bee Tee is free improv number that has a bit of a Latin groove to it. Some more free jazz follows on the third track (Concere Ntasiah), which has an almost Gothic rhythm thing anchoring the proceedings - plenty of open space, and quiet moments, with some lovely acoustic guitar soloing. Be Bo Bo Be closes the album with a sound that I'd almost characterize as 1960s Archie Shepp or Marion Brown gone electric, with a splash of Revolutionary Ensemble thrown in - it's definitely fire music. Punk jazz may be an apt enough description, certainly in terms of spirit, and often in sound. I'd mosh to it.

[Update 12/3: one of my commenters had some additional info about this album: Great post, here's a little more discog info for you, this WAS released in 77 or so as Charles Bobo Shaw & the Human Arts Ensemble "Concere Ntasiah" on the Universal Justice label (cat# UJ101). Good to know!]