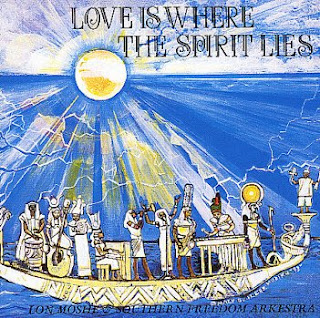 I just can't get enough of the music created on the Black Fire label during its run in latter half of the 1970s. This particular album credited to Lon Moshe (who was part of James Plunky Branch's bands Juju and Oneness of Juju). The tunes on Love is Where the Spirit Lies are very spiritual kozmigroov jams that are certainly influenced by early Juju (just check those first two Strata East albums), but also draw upon the sound and vision of such cats as Sun Ra, Alice Coltrane, Pharoah Sanders, early to mid 1970s Don Cherry, and early Mtume. Fans of those artists or of the Strata East label will probably groove on this one.

Just a word of warning: the sound files are ones I found via p2p networks a few years ago and the last track is badly messed up (if this were the good old days of analog sound media, I'd swear that half of that particular track had been accidentally taped over). The rest of the album should play just fine. Who knows, perhaps I will have incited someone to hook us up with a better version. Like a lot of the albums from the Black Fire back catalogue, this one goes in and out of print. I've just never had the good fortune to have the coin when it has been commercially available. Some day perhaps.