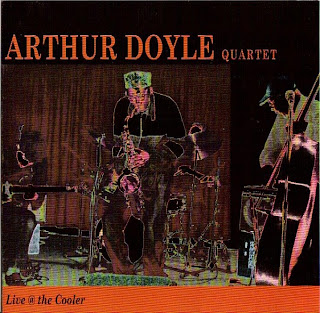 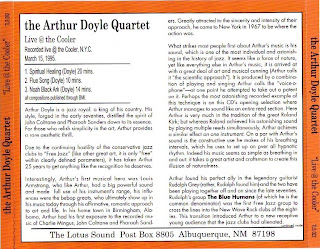 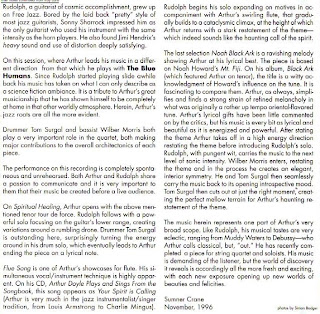 Live @ The Cooler is a nice follow-up to the Blue Humans album I posted previously. This time around, Arthur Doyle is in charge. The tunes are ones that are among Doyle's standards (to the extent that someone as obscure as Doyle can have songs considered standards) - especially "Flue Song" and "Noah Black Ark". The former features Doyle playing the flute; the latter is a homage to Noah Howard, who gave Doyle his first big break in the free-jazz realm on The Black Arc (the piece builds on that album's tune "Mount Fuji"). On the opening track, Doyle sounds like he's playing multiple reeds at once. For his part, Rudolph Grey's playing is as loud as ever, but the sound is more atmospheric. To these ears, 15 years allowed Doyle and Grey to become wiser, more skillful collaborators. It doesn't hurt that the rhythm section is up to the task of keeping up with those two.

Released on The Lotus Sound in 1996