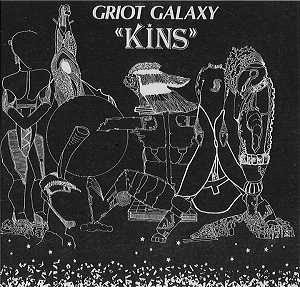 Griot Galaxy was a Detroit-area crew that flourished during the 1980s. Kins was, as far as I know, their first release. I first of heard of Griot Galaxy in 2004, and over the next year learned a good deal about the band and one of their members, Faruq Z. Bey. These cats at times sound like a portion of one of Sun Ra's arkestras - indeed the song titles alone suggest a Sun Ra influence, as did the band's apparent tendency to perform in Sun Ra-style costumes. At other times throughout the album, they show some definite punk and funk influences, such as on "Zenolog Aintro". Overall, the music is moody, angular music, perfect for the times (then and now). Fans of Sun Ra, Ornette Coleman (especially his Prime Time band), James "Blood" Ulmer (even though there is no guitarist in this band), late-1970s Human Arts Ensemble, and Defunkt should find plenty to like about this crew.