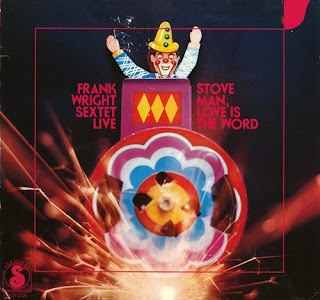 During its short existence, the blog Church Number Nine managed to post up a number of treasures, including the Frank Wright album, Stove Man, Love is the Word. It's a post-Center of the World outing that finds Wright and crew doing what they do best: blowing some minds. The reviewer at Allmusic.com describes the album as an extension of Eric Dolphy's work. The title track is a bluesy waltz number with Wright offering some smoky vocals (something he loved to do on his late 1970s albums - his singing style reminds me a bit of Satchmo for some reason). "T-and-W" picks up the pace with Wright, Alim, and Smith serving up some spirited soloing over Latin percussion - makes for some very pleasant listening. "Rice Patch" is a darker piece that seems to draw on mid-1960s Trane, mid-1960s Don Cherry, early 1970s McCoy Tyner for sonic inspiration. "Export" ends the album with a bang - a very fast-paced joyous noisefest. Solid spiritual jazz from beginning to end.