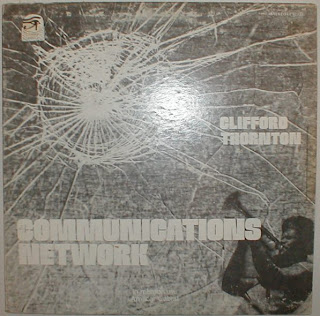 In some ways Communications Network is an uneven joint, if for no other reason than that the tracks were recorded at different locations with different ensembles. The first two tracks (which would have made up side one on the LP), were recorded in January 1972 by a quartet that included Thornton on cornet and electric piano, L. Shankar on violin, Sirone (of Revolutionary Ensemble fame) on bass, and Jerome Cooper on percussion. The music on those two tracks is very free, spontaneous, spiritual, and relatively mellow. The third track, "Festivals and Funerals," recorded three months later, is a considerably edgier experience. Here, the septet provides some musical backing for poet Jayne Cortez, and in between her verses these cats kick out the jams. It's angry music for an angry time - and the sounds still resonate over three and a half decades later. One bit of trivia: Marzette Watts, the cat who led a couple albums during the late 1960s (including the Marzette Watts Ensemble on Savoy), was credited as engineer for the album, and mixed tracks 1 and 2. Communications Network was released on Third World Records, catalogue # 12272.