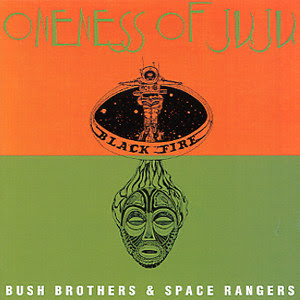 Bush Brothers & Space Rangers, which is sometimes called Oneness of Juju's "lost" third album, was recorded in between Space Jungle Luv and Make a Change. It's a transitional album, with Plunky and crew continuing to deliver those spiritual and spirited kozmigroov jams, much as they had on 1975's African Rhythms and 1976's Space Jungle Luv. "Bootsie's Lament" is a gorgeous slow moving vocal number that makes me wonder why Ms. Lewis never quite had the fame that such contemporaries as Dee Dee Bridgewater had. The band reprises their signature tune "African Rhythms" with funkier percussion-laden instrumentation, and layers of vocals that make the end result more radical, more out there than the original version. "Rhythms Timelessness" is an instrumental that takes the basic "African Rhythms" theme and slows it down. "West Wind" has that atmospheric feel that would put it right at home with Herbie Hancock's early 1970s sextet, or Bennie Maupin's and Julian Priester's ECM albums from the decade. "Nooky" could have been an outtake from either of the first two Oneness of Juju albums. The band also does a couple covers - something a bit unusual - including a vocal version of Miles Davis classic "All Blues", and a cool version of George Benson's "Breezin'" that could have been radio-friendly (certainly for stations and DJs focused on R&B and Quiet Storm). What sets this particular album truly apart from its predecessors, though, is the presence of several fairly mainstream-sounding R&B numbers that foreshadow the band's minor early 1980s hit "Every Way But Loose." "Plastic" was the probable single, had this album had a proper release around 1978. That tune, along with "Be About the Future", "The Stuff to Make You Move", and "Get Your Head Together" are quite dancefloor friendly and certainly could have made the playlist of R&B stations. Plunky and crew were out to make a statement, and their positive message comes through loud and clear, and just as relevant three decades after their recording.