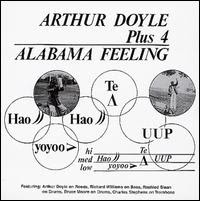 Here's a personal favorite from the Arthur Doyle vaults - Alabama Feeling. This album was originally released in 1978, and then reissued on CD 20 years later. It's an intense ride from beginning to end. Doyle has made an art form out of lo fi free jazz recordings, as well as serving up a unique style of sax playing: the cat can sound like he's playing multiple reeds with just one instrument, and views the various instruments he plays (tenor sax, bass clarinet, and flute on this album; recorder on other albums) as an extension of the human voice. His approach may be an acquired taste, but as far as I'm concerned it's a taste well worth acquiring. I first got turned on to Doyle when I picked up a Blue Humans recording (Live NY 1980), and was intrigued not only with his work from that gig, but also a review of Doyle's earlier work on Noah Howard's classic album Black Arc included in the liner notes:

Doyle is another matter. This man is dangerous - he never plays anything you could recognize, just furious blasts of rage. His solo on "Domiabra" couldn't be written down, or even sorted out. It sounds more like raw energy than anything I've ever heard. He's nasty, man.

Given my unabashed love of all sorts of unorthodox music (this blog focuses on my jazz side, but I have had a long-standing love of punk, postpunk, and early industrial music), the moment I read descriptions of an artist as "dangerous" and "nasty" - I want to know more. I've been spending the better part of this decade trying to get a hold of as much of Doyle's recorded work as possible.

A review of the album by Dan Warburton (who has occasionally performed with Arthur Doyle):

In late 1977, Arthur Doyle brought his quintet to New York to play at the Brook, a loft space on West 17th Street managed by Charles Tyler, with whom Doyle formed the label Dra that same year. The saxophonist/flutist/vocalist was joined by old friends from his hometown of Birmingham, Alabama, Charles Stephens on trombone, and Rashied Sinan on drums (whose only other memorable appearance was on Frank Lowe's 1973 ESP album Black Beings). Sinan turned up with a student of his, Bruce Moore, "to give it more rhythmic feel," and Richard Williams was brought in on Fender Bass to take on both drummers. From the opening splendidly titled "November 8th or 9th -- I Can't Remember When," Alabama Feeling pounds the listener into the ground with thrilling energy, playing easily on a par with classic albums on labels such as ESP and BYG Actuel. Doyle released this recording of the concert, whose dreadful sound quality was perfectly in keeping with the prevailing no wave ethos of the period (Doyle was, incidentally, one of the first jazz musicians to play Max's Kansas City in 1978, with Rudolph Grey and Beaver Harris as the Blue Humans), on Dra in an edition of 1,000, and the first CD reissue 20 years later in 1998 (also limited to 1,000 copies) was transferred by Glenn Branca's house percussionist, Wharton Tiers, direct from vinyl, complete with surface noise and dodgy editing. Connoisseurs of Sun Ra (with whom Arthur Doyle also played but, alas, never recorded) have long been prepared to forego quality sound in the name of great music, and any listener prepared to do the same will not be disappointed. It's worth it for Doyle's snarling entry on "Ancestor" alone.

The track "Ancestor" to which Warburton refers is interesting in that it seems to be a capsule summary of the history of the human species boiled down to a handful of minutes. The references to ESP-Disk and BYG recordings seems apt - if you dig much of the material from those legendary labels, you'll fall in love with Alabama Feeling.