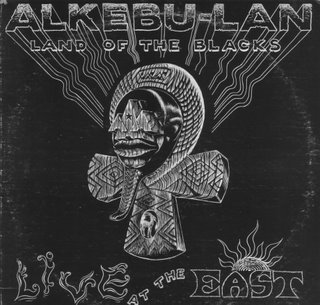 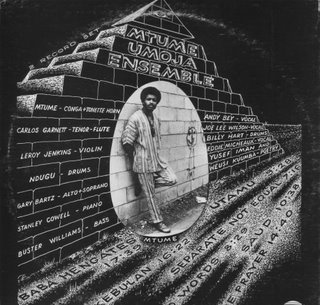 The cover art (above): Front cover, Inside cover, Back cover. Click the pix to see them full-sized.

Alkebu-Lan: Land of the Blacks

Capsule Info: Recorded August 29, 1971 at The East, New York. According to Jim Flannery of the Kozmigroove Mailing List, it's "Pretty damn wild...AACM goes to Africa... but I guess I'd have to add 'Pharoahs go to Saturn' to get the picture complete. Starts out with a four-minute speech describing the role of 'these jams' in the service of Black Nationalism... and then backs it up. Cover is black with white line-drawing of a sorta Egyptian-meets-subSaharan figure (Pharoanic beard, pyramids for eyes, goat amulet), back side has an eye-in-pyramid drawing with photo of Mtume leaning against it." Having finally heard this record finally, I love it. While it's certainly dated, it's a fascinating glimpse of the marriage of early 1970s Afro-centric music, politics and spirituality, plus it really grooves. To me reminiscent of Bartz' Ntu Group work, it's more energetic and colorful than those records. A treasure: Strata-East was an extraordinary label. (Ian Scott Horst: Jazz Supreme)

James Mtume was born James Foreman, and is the son of sax player Jimmy Heath. He's probably best known for his funk/r&b combo Mtume which scored a hit with "Juicy Fruit" back in 1983. He also has done some production work (e.g., The Bar Kays album Animal) and composed the music & theme song for New York Undercover (a cops & robbers drama from the early 1990s). If I recall correctly he's been director of a New York theatre and a community activist in his adopted city of NYC.

Before all that, he was a jazz percussionist (given the influence of his dad & uncles - i.e., The Heath Brothers no huge surprise) who was a regular member of Miles Davis' touring & recording group from 1971 through 1975 and an occasional band leader in his own right. Alkebu-Lan is the first album to appear under his own name although there is some speculation that Kawaida (a late 1960s kozmigroov classic) is truly his first as a leader (see Ian Scott Horst's site for more detail - sometimes it's credited to Albert Heath, sometimes to Herbie Hancock). His last album in the jazz idiom would be Rebirth Cycle, recorded in 1974, but not released until 1977.

The files are 192 kbps mp3s, ripped from vinyl. Expect to hear some pops, etc., though thankfully the vinyl recordings seem as if they had been well-cared for.

The music itself fits in very nicely with the music from The Black Artists Group (see previous blog entry), as well as cats such as Human Arts Ensemble, early 1970s Art Ensemble of Chicago, and early Juju (Plunky Branch's great band that also recorded on Strata-East). The album opens with a four minute speech outlining the album's purpose and then kicks out the jams. Since this is a live album, there is plenty of speaking in between tunes. The tunes themselves have a very free feel to them, with plenty of percussion, chanting, spoken word, and intense jamming throughout. The music holds up well nearly three and a half decades later, and just reading the credits it's easy to understand why - these cats were for the most part well-known and well-respected performers. The extent to which the spoken sentiments are "dated" I suspect will depend on who you're talking to.

Don't miss out. The album went out of print and as far as I know was never reissued on cd - a fate shared by many other wonderful Strata-East records from the era. For those of us who dig this particular form of improvised music, Alkebu-Lan is something of a Holy Grail & the vinyl (if you can find it) will fetch a premium.