Joseph Jarman: As If It Were The Seasons 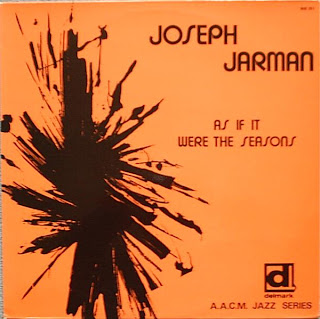 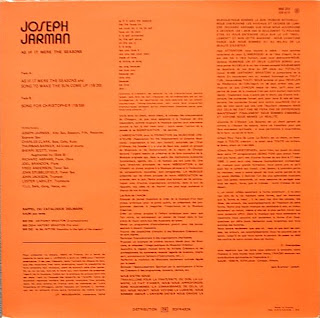 This set is one of the legendary early AACM releases. Joseph Jarman (heard on alto, bassoon and soprano in addition to fife and recorder) is featured shortly before he became a member of the Art Ensemble of Chicago. Some of his sidemen would become well-known (pianist Richard Abrams, tenors Fred Anderson and John Stubblefield), while others remained obscure or short-lived (bassist Charles Clark, drummer Thurman Barker, flutist Joel Brandon, trumpeter John Jackson and trombonist Lester Lashley). The two lengthy group improvisations (Sherri Scott adds her voice to "Song for Christopher") contrast sound and silence, noise with more conventional sounds, "little instruments" with powerful saxophones. Certainly not for everyone's taste, the truly open-eared will find the innovative results quite intriguing.

You might have to do a little digging, but it hasn't gone entirely out of circulation just yet. Beautiful work that fits in very nicely with Roscoe Mitchell's Sound and early Art Ensemble of Chicago recordings.