I noticed that Orang Aural had posted the album The Trance of Seven Colors, credited to Maleem Mahmoud Ghania & Pharoah Sanders recently. What I've had the privilege to hear of the Gnawa has blown me away, so I was happy to see that someone else had uploaded this particular out-of-print session. Some details of the album: 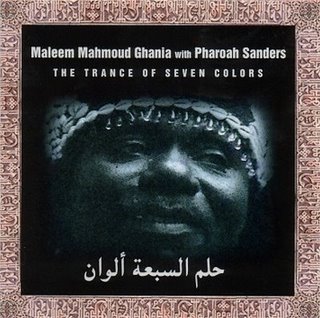 "To call this outing 'authentic' would be an understatement, given that Bill Laswell and Pharoah Sanders took only some digital recording equipment and Sanders' saxophone to Morocco to record it. The CD sleeve photos show the informal nature of the proceedings, revealing that the recording took place in someone's home with a large cast of musicians, many of whom are Ghania's family members.

The recording did not suffer at all from the mobile equipment, and The Trance of Seven Colors lives up to its title, giving the listener first-hand access to Gnawa healing ceremonial music. Ghania's Guimbri (an African instrument) unravels masterful, off-kilter, bass-like lines over chanting and various percussion instruments. Pharoah Sanders sounds inspired in the setting also, making this a worthwhile recording for Sanders fans who heard intimations of world music in his '60s dates."

All songs traditional and arranged by Maleem Mahmoud Ghania except where noted
Produced by Bill Laswell
Co-production and organization in Morocco: Eric Rosenzweig
Recorded by Robert Musso in the House of the Caid Khoubane in the Medina of Essaouira, District Chbanat, Morocco on June 1,2 & 3, 1994
Released by Axiom/Island in 1994

You can download The Trance of Seven Colors here, courtesy of Orang Aural.

Apparently Orang Aural is quite a fan of Gnawa healing music, and has also uploaded mp3s from three cassettes by the same artist (under the name Mahmoud Guinia). I'm listening to one of them now as I am blogging. Additionally, in August Orang Aural posted The Splendid Master Gnawa Musicians of Morocco (jointly credited to jazz pianist Randy Weston). I've had that album for a while - something I snagged on ebay once upon a time - and highly recommend tracking it down. Weston plays some Gnawa-inspired piano on one track, but otherwise this is strictly a Gnawa recording. The music definitely hits on some sort of emotional level that defies words - I became an instant fan of Mahmoud Ghania when I first heard a track off of The Trance of Seven Colors. As Orang puts it:

I can't describe Gnawa music here, and just to call it Moroccan Blues is way too simple - I'll give the interested listener a list of site and text links, where you can read and learn about the music and its context in Moroccan culture:
and two more "fancy" Gnaoua websites:

Mad props to Orang Aural for upping some of those cassettes - I hope this blogger will upload some more. Gnawa music is quite addictive. I also hear Gnawa musical influences in some of the coolest contexts (not only jazz) - e.g., the song "Who's to Blame" by Ozomatli is a Gnawa-tinged rap tune.
at 10/19/2006 02:50:00 AM