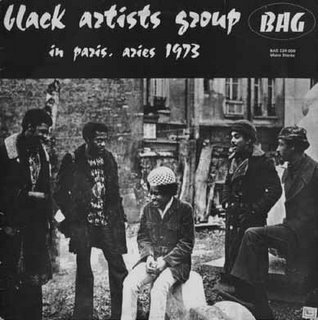 You can download the album here. This particular album was found via the miracle of p2p. From the notes that came with the downloaded files (which by the way sound quite good - 320 kbps mp3s from vinyl):

The Black Artists Group was an unit not unlike that of The Art Ensemble of Chicago. Except they only recorded this one document and it only came out in France on a label named after the group. This is squeaky, spindly stuff and very OPEN and a good indication of what was happening in the early 70's with members Oliver Lake (later of the infamous World Saxophone Quartet) and Joseph Bowie (Art Ensemble's Lester Bowie's bro, later to start Defunkt).

If you like Art Ensemble of Chicago (circa the 1970s) and the Human Arts Ensemble, you'll like this recording. Needless to say, this music is hard as hell to come by.