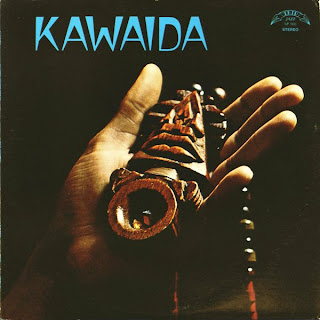 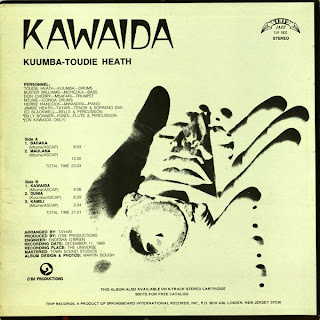 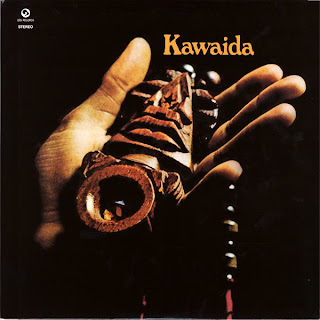 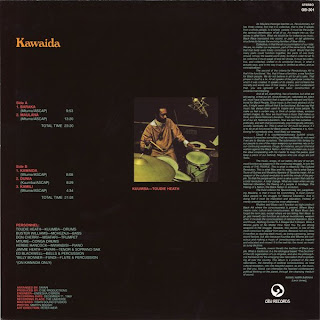 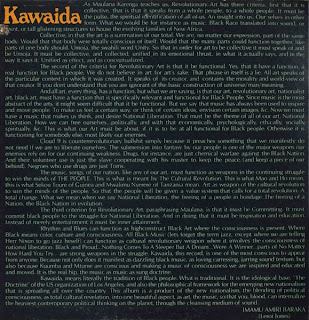 Kawaida is an interesting and problematic recording. The problematic element is whom to credit as band leader. At various points it's been credited to Albert Heath (or at the time Kuumba Toudie Heath - see album art above) and Herbie Hancock (on one of the CD reissues from the 1990s). Over at the Kozmigroov connection and at Jazz Supreme it's been suggested that the album really should be credited to Albert Heath's nephew, James Mtume.

Confused? Maybe one day we'll get the lowdown. I won't hold my breath.

There's no doubt that the album was a Heath family joint, with Albert (Mtume's uncle) handling the drum set, Jimmy (Mtume's dad) handling the sax chores, and Mtume contributing the fine conga playing and spoken word. Mtume wrote four of the five tunes (Baraka, Kamili, Maulana, and Kawaida), with Albert contributing the other tune (Dunia). The list of musicians is certainly impressive, and includes a number of heavyweights outside the Heath family, such as Ed Blackwell, Herbie Hancock, & Don Cherry.

The music speaks for itself, and can be characterized as having a distinct modal, percussive, cosmic feel to it. The first two tracks, the mid-tempo "Baraka" & and the slower "Kamili" are pleasant modal, soulful jams that fit in quite well with what was going on in the immediate post-Coltrane era. Herbie Hancock get's featured front and center on both tracks and sounds right at home with the music - it fits in (minus the electronics) with Hancock's Sextant recordings of the late 1960s & early 1970s (you could also easily play these tunes alongside of just about anything from McCoy Tyner's excellent album Asante). Just check out the opening of "Baraka" - Herbie gives the session a profound and haunting beginning. "Dunia" (Albert Heath's tune) is the closest the album comes to free jazz - that track features Don Cherry's trumpet very prominently, and the whole crew kicks out the jams and sets the studio on fire. If the first two tracks put you into a meditative trance, "Dunia" will wake you right back up. The final two numbers, "Maulana" and "Kawaida" are where we hear the roadmap for Mtume's subsequent jazz explorations - both numbers are contemplative, percussion-laden, and include spoken-word statements with a distinctly Black Nationalist message (especially on the final track, "Kawaida"). The vibe is very positive, spiritual, and nothing short of revolutionary. The mix of musicians is just right (these cats were all on the same wavelength for this session) - there isn't a weak moment on this record. If you've been digging on the other stuff I've shared so far, don't miss this one!

Capsule Info: Not wanting to fork out $40 for a used copy I've settled for a taped dupe. This is more properly, I'm told, Albert's son [editor's note: Mtume is Jimmy Heath's son; Albert Heath is Mtume's uncle] Mtume's first album, and certainly it bears his percussive, and declaratively African nationalist stamp all over it: it's the prequel to Mtume's own ALKEBU-LAN, LAND OF THE BLACKS. It's a great album, with Herbie Hancock at the height of his jazz playing, swahili invocations, lots of percussion, and a deep spiritual vibe throughout.

Note that the track listing here is from the CD version: the order on the original LP version appears to have been different.