Human Arts Ensemble: Under the Sun 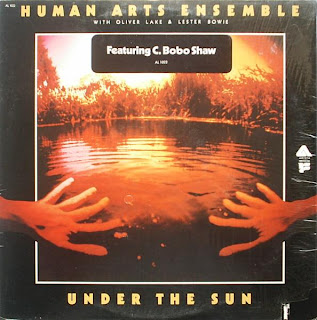 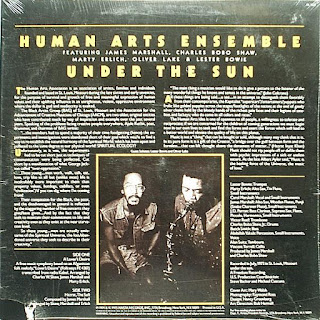 A commenter asked about this one a week or two ago, so here it is. Some info:

Human Arts Ensemble
Under the Sun

The Human Arts Ensemble, led by drummer Charles Bobo Shaw, was one of the central performing groups to emerge from the Black Artist Group (BAG), a musician's organization founded in St. Louis in the early '70s. In addition to Shaw, this recording features two other fine musicians who would make their mark, Marty Ehrlich and J.D. Parran, as well as guest appearances by trumpeter Lester Bowie and altoist Oliver Lake. The two side-long pieces follow roughly the same model. "A Lover's Desire" uses a theme based on an Afghanistani folk melody with an added very funky bassline to serve as a platform for uninhibited improvisation. The improv is more collective than individual with voices surfacing unpredictably and the beguiling melodic riff coming forward from time to time to act as glue lest things get too far out of hand. Parran's bass clarinet work is especially luscious on this piece. The other composition, James Marshall's "Hazrat, the Sufi," also has a Middle Eastern tinge, but here the rhythmic drive fragments into a series of stop and start improvisations more akin to some of the spacier Art Ensemble of Chicago explorations and almost as impressive. Under the Sun is an enjoyable, wildly free, and loose session, and one that should appeal to any fan of the AACM and its descendents.

Apparently this album would be issued again in 1975 under Arista's Freedom imprint and would actually generate some buzz and some good sales for an avant'garde jazz recording. The makeup of this recording date is a bit different from the previous album: Oliver Lake, Bobo Shaw, James Marshall, and J.D. Parran are the holdovers, joined this time around by Lester Bowie (of AEC fame), Marty Erlich, Victor Reef, Butch Smith, & Carol Marshall. The slightly larger ensemble adds some electric bass and some vocals to the mix, and in the process creates an album that is distinctively funkier than its predecessor and no less compromising. The first side ("Lover's Desire") practically dares the listener to put on some dancin' shoes. A dj looking for some fresh beats could have some fun with much of the tune - and in fact some of the instrumentation about 2/3 of the way through is reminiscent of a dj scratchin' at a hip-hop gig. The female vocals are very beautifully done and add to the experience - Carol Marshall makes the tune even more warm and inviting than it would have been already. The second side ("Hazrat, the Sufi") has a more Middle-Eastern flavor, a more free feel to it, and a noticeable blues-soaked edge to it (must be the harmonica as the tune progresses). The music takes chances, and yet remains beautiful, spiritual, and sensual.

The music definitely fits in well with the period, and holds up well after three decades. Too bad this album hasn't seen a proper cd reissue.

Since this was ripped from vinyl, expect the usual pops and scratches. Mp3s are 320 256 kbps. In other words, this will sound good.