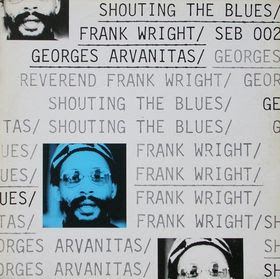 This one's definitely a rarity! Some info:

The sound quality is decent. Expect the usual snap/crackle/pop sounds that go along with listening to a record that's been played a few times. The files are labeled "Side 1" and "Side 2" with the tunes appearing in precisely the order in which they're listed above.

As the title suggests, there's a strong blues vibe to this particular recording. Frank Wright handles some vocal chores on this date - his vocal style isn't pretty, but then again, you don't want your blues singers to sound like potential American Idol contestants. In other words, the voice fits the musical background. "Up Against the Wall" is a standard blues tune. "Two Birds With One Stone" is a free-jazz tune that would fit in very well with Frank's earlier work. "Long Way From Home" heads back into blues territory. "Church Number Ten" picks up where an earlier Frank Wright tune ("Church Number Nine") leaves off. Think of a free jazz hymnal, and you'll pretty much get the idea.

On the second side, "Right On" layers an incendiary Frank Wright sax instrumental outing over a latin jazz background. "Reverend Blues" is a slower hymnal-style blues that opens with an Ayler-style sax solo and then Frank Wright lays into his troubles with that husky, smoky vocal style. "Jerry" follows up with some uptempo free-form jamming. Although these cats kick out the jams, the sound is always pleasant. "Incantation" ends the album with a gorgeous, meditative jam that again might fit in with some of Frank Wright's earlier work or perhaps some of Pharoah Sanders' gentler pieces from his Impulse! days.

I'll let the musical experts argue over whether this is an essential Frank Wright recording. It's certainly a unique addition to his canon in that the man actually sings. All I know is that it works for me, and that if you're a Frank Wright fan already, this one will treat you right. If you're new to the music of Frank Wright and find yourself really liking the instrumental tracks, make sure to look into his other recordings - I know that both his ESP-Disk recordings were recently reissued (as a 2-cd set), as was the early 1970s classic Uhuru Na Umoja.

Also of interest: I've bookmarked a couple Frank Wright discographies - one maintained by George Scala and one over at Center of the World. More bio info on Frank Wright may be found at Answers.com.
at 10/20/2006 11:19:00 PM