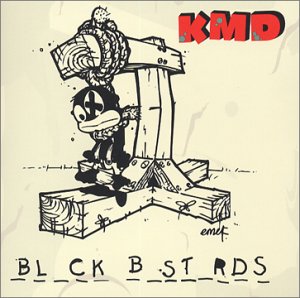 If your idea of rap is Vanilla Ice or Mr. Britney Spears, then back away now - slowly, turn around and walk away. Whatever you do, don't look back. Do not download this recording, and whatever you do, if you find the cd in some used record store, run. Fail to heed my advice at your own peril.

Originally scheduled for release back in 1994 but scrapped due to controversial cover art, K.M.D.'s follow-up to their debut Mr. Hood was considered to be one of the Holy Grail records in the annals of hip-hop history. The death of group member Sub-Roc in a car accident squashed the future of K.M.D. shortly after it was recorded. Employing ideals and samples from the album The Blue Guerilla by Kain of the Last Poets, the tone of this record was to be dramatically different than their first, which was lighthearted and playful while still spreading a message about racial stereotypes. Volatile yet poignant tracks like "What a Nigga Know" and "Black Bastards!" are hip-hop fireballs. Subjects like alcoholism ("Sweet Premium Wine"), drug use ("Smokin' That S*#%"), and women ("Plumskinzz") were all touched upon with incendiary tones. The sound of the record is very raw and sounds unfinished due to Elektra shelving the project, but it doesn't take away from the magic that would have made this a suitable follow-up.

KMD not only drops Kain's Blue Guerrilla samples and references all over the place, but also has the good taste to sample from Pharoah Sanders' classic album Thembi on one cut ("It Sounded Like A Roc").

Another review via Amazon.com, just to whet your appetite on this out-of-print cd:

I'm pretty sure most of you know the story behind the album. If not, let me fill you in. KMD consisting of Zev Love X (now known as MF Doom) and his brother Subroc. Somewhere in 1993, Subroc was hit by a car and died on impact, leaving Zev Love X to finish the album by himself. When the album was done in 1994, Electra Records shelved the album because of its lyrics and the cover art showing a sambo character being hung. Electra would soon cut KMD from their roster, leaving Zev in obscurity. But the album officially sees the light of day in 2000, when MF Doom released it independently.

One thing I have to commend is the great movie samples that are on this CD. Starting with the intro "Garbage Day #3" which is made up of them. "Sweet Prenium Wine" is a song about knocking back a few drinks while the samples play as the hook. Most of the songs here on this CD are about smoking, as heard on the song "Smoking That S**t" which features vocals from Earthquake, Lord Sear, and Kurious. "Contact Blitt" (could be titled "Contact Blitz" or "Contact Blunt") is a song about Zev ride a bus to Los Angles with an arrogant bus driver, while smoking. "F Wit Ya Head" featuring vocals from H20 and CMOB and the song "Suspended Animation" are more songs dedicated to weed, all more to offend the higher-ups of Electra Records. One great track is "What A Niggy Know" (could be titled "What A Nigga Know") is Zev and Subroc comming correct with a serious attitude that will make your head nod. The 12 inch single was the only item released by Electra Records, but since the album was shelved, the single was pulled also. MF Grimm would drop in to help Zev do the remix. Subroc would get in a few solos also. He shows he had the lyrics on the song "Gimmie" (could be titled "Give It Here") as he says "Give me a choo choo train for my [...] tracks..." He would also do his thing on the song "It Sounded Like A Roc."

One thing I have to knock is what many people have been saying in other reviews, the sound quality. Some songs sound like they have been worn out over the years so it sounds like a bootleg of a bootleg, making the vocals sound like they're held back by a sound barrier. A great example is the Zev Love X anger expressed song "Get-U-Now" and "Smoking That Sh**". Also I'm sure some of this album was recorded off a record. How did I come to this conclusion? The song "Plumskinzz" is exactly what I'm saying. The song has a nice piano sound and is going good as Zev spits his verse. As soon as it gets halfway through the hook, it sounds like the vocals were taken away and the beat freezes up. Then all of a sudden you hear MF Dooms [recent] voice come in and say "Loose Hoe God&Cupid" or as many listeners have interpeted "You're so GODDAMN stupid!" I don't EVER want to hear that again! Obviously he used a 12" single and someone hit the needle causing it to skip loudly to the instramental. The song would resume later on in the CD when a woman would come in and say "Oh Now I Don't Believe It!" as Subroc would continue his verse. Whats ironic about this whole song is that this song was recorded in 1991, and a former KMD member named Onyx the Birthstone Kid (many people who are familiar with late MF Doom albums know him as Rodan) had a verse on that song between Zev's and Subroc's (and believe it or not, Onyx had the best verse out of the three). So there is no actual musical vibe because those interludes causes a big chunk of the song to be missing. (How about recording the song correctly Mr. Dumille?) If you want to hear the uncut clear version of it, just find a "Nitty Gritty" 12 inch single because its the flipside of that, or you can locate a 1994 bootleg of the album.

Overall I'm happy that this album was finally released, since it was one of the biggest albums in 1994 that was shelved. But the way that this album was put together soundwise, that title could have been easily taken away. I [recommend] this album to those who want to hear more examples of Doom's early 90's production, the way MF Doom sounded in 1993/1994, or just curious of the lost album. Otherwise, you're better off buying "The Best Of KMD Album" which is a combination of this and the Mr. Hood album, or wait until Mr. Dumille decides to remaster the album and reissue it.

Not easy listening, by any means. This shit will taunt you, bend your mind, twist it around, and leave you in some urban Escher painting filtered through Munch's "The Scream" and will have you on the lookout for The Blue Guerrilla on the corner of every street. If you got this far, though, you know you wanna hear it.
at 10/06/2006 02:39:00 AM