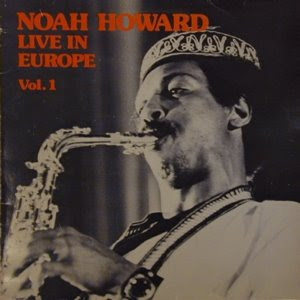 Here's another one of those extreme hard-to-find albums. I obtained my copy several years ago on one of the p2p networks, and haven't seen it around the internet tubes since (save perhaps for the long-gone Church Number Nine blog). The sound is practically Coltrane-esque. This is music with plenty of fire, yet pleasing to the ears in much the same way that Trane's classic quartet was circa 1965. Noah Howard authored or co-authored three of the tracks. The remaining tracks are covers, including one of 'Trane's standards, "Ole'".

Nat Dove is credited with arrangements for all tracks except "New Arrival". All tracks recorded at various European venues during 1975, and released on Sun Records, catalogue # SR 105.