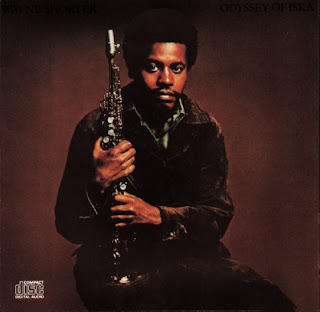 This album features music from Shorter's last recording session for Blue Note, and as far as I know is currently out of print in the US. Here's the AMG review:


On August 26, 1970, Wayne Shorter recorded two separate albums for Blue Note (the other one is Moto Grosso Feio), his final projects for the label. For this set, Shorter (doubling on tenor and soprano) utilizes a double rhythm section comprised of vibraphonist Dave Friedman, guitarist Gene Bertoncini, both Ron Carter and Cecil McBee on basses, drummers Billy Hart and Alphonse Mouzon, and percussionist Frank Cuomo. On the verge of joining Weather Report (referred to in the liner notes as "Weather Forecast"), it is not surprising that Shorter's originals include titles such as "Wind," "Storm," and "Calm." These moody works were never covered by other jazz players but they work quite well in this context, launching melancholy flights by Shorter.