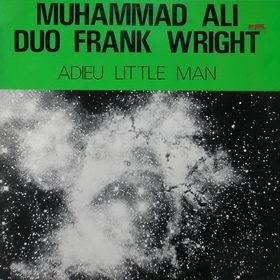 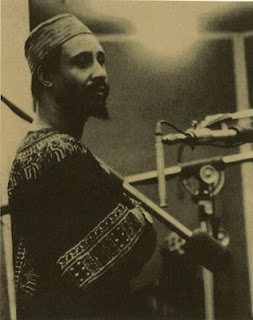 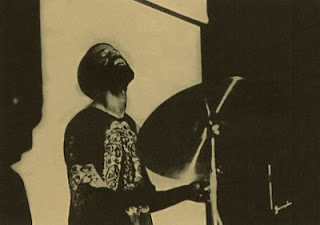 Here's a reed/drum duo, in the tradition of John Coltrane and Rashied Ali (Muhammad's brother), tearing the roof off the sucka! If you like energy music, and loved Interstellar Space, you'll love this. Muhammad Ali didn't get a lot of recording opportunities during his career; his brother, who was also under-recorded, fared somewhat better. Those sessions on which Muhammad did appear quickly went out of print, with few being revived on CD (perhaps among the more noteworthy of those reisues was his appearance on three of the tracks on Alan Shorter's debut as a leader, Orgasm).

Adieu, Little Man was recorded in Paris in April 1974, and released on Wright's Center of the World label, catalogue # 004. The top image is from the front cover of the album (thanks to Rate Your Music); the remaining two images are of Frank Wright and Muhammad Ali, respectively from around that time. I don't know if those were part of that album's artwork or not. Whoever originally ripped this, thanks! Also props to Arcturus who sent this my way when my computer system went down last year.