It's been a while since I last dropped any Human Arts Ensemble joints, so here's one from back in 1978, in two volumes. 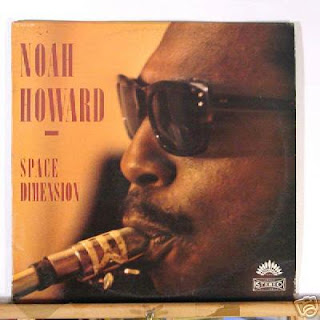 Here's one from the vaults that makes the rounds on the internet from time to time. This particular recording dates back to the period when Noah Howard was regularly collaborating with the late Frank Wright - who appears on this session, and whose famous tune "Church Number Nine" is showcased.

Around the end of my summer hiatus, apparently there was a bit of psychodrama that I thankfully largely missed out on. To hopefully avoid any sort of repeat, here's how this blog works:

1. I link other blogs and sites for one of two reasons - a) the blog or site links to here, or b) the blog or site has interesting content (imho) that I think others should check out. The usual norm in the world of blogging is that links, and the readership that hopefully accompanies those links, are to be encouraged. If you run a blog, but don't want new readers, you might look into either making the blog or website strictly "members-only", or maybe just get out of the blogging biz altogether. Also, if you have a blog and already link to here, just drop me a line and I'll be glad to reciprocate (within reason - I won't link to anything pornographic or racist, so don't even go there).

2. Comments are great! Although I don't often reply, I appreciate the props, feedback, and knowledge that others share here. That said, from this point forward, any language that I deem abusive or threatening will be immediately deleted at my discretion. The same goes for any comments (regardless of content) that are authored by "anonymous" (c'mon, that just shows a combination of laziness and cowardice).

3. Email is fine, but please note that even legit email messages can end up caught in a spam trap. If that happens, I'll likely never see the message. If you want to make sure that something related to this blog gets read, put this blog's name in your message subject header followed by a concise description of the message's topic. I check messages about every other day, so be patient. If a message is urgent, and you don't get a reply, re-send the message (just on the off chance that it got caught up in spam). Whatever you do, don't throw a tantrum because you don't get an immediate reply, and please realize that sending trolls my way in the aftermath of said tantrum will not help but rather will hurt your cause - they'll just get their comments tossed into the bozo bin, and in all probability will be banned from posting here from now on; I'll end up mildly annoyed, and your feelings will still be hurt.

Email ThisBlogThis!Share to TwitterShare to FacebookShare to Pinterest
Labels: blogging

Jothan Callins & The Sounds of Togetherness - Winds of Change 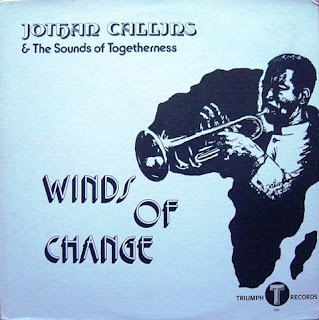 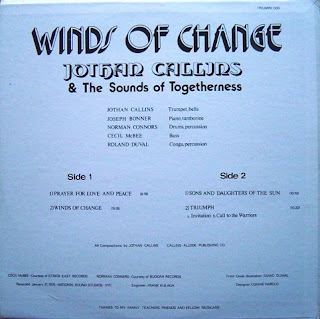 1. Prayer for Love and Peace
2. Winds of Change
3. Sons and Daughters of the Sun
4. Triumph

I first heard of this one courtesy of Seth Watter of the blog, Meshes of the Afternoon. Seth does a great job of describing the album - better than I'd probably do as a non-musician hobbyist. Callins apparently worked with a number of big names in the music world (not only jazz), including of course the legendary Sun Ra. Not surprisingly, there is a bit of a Sun Ra influence in the music. The album would have easily fit in with the Strata-East roster (as Seth notes), as well as T.R.I.B.E and Black Fire (Oneness of Juju's old label from the period). In other words, expect some primo kozmigroov, with the emphasis more on the cosmic. Absolutely gorgeous music.

Apparently, Callins and The Sounds of Togetherness toured extensively during his career. It's a pity he didn't get more of an opportunity to lead some studio sessions. He certainly had the vibe. The one document he left behind as a band leader is tantalizing.

Here's some vintage late 1970s free jazz, courtesy of the late Beaver Harris. The music on these three mp3 files is from a live broadcast at WKCR-FM. About the best information I can get on this session comes from the David S. Ware sessionography:

With the possible exception of Sumpa, these cats are all close to household names in the avant-jazz world. The sound quality is quite good - the nice thing about live-in-studio performances is that you get a feel for what the band would be like live, but without the potentially dodgy acoustics that plague live club or concert bootlegs.

The first track is a sprawling 44 minute piece of pure cacophony that slowly takes shape as the musicians get a feel for their surroundings. Needless to say, the drums and percussion are prominent, and sometimes Malik and Ware sound if they're struggling to be heard. Bluiett's bass simply seems to blend into the percussion. About halfway through, Malik gets some extended space to solo, followed by Ware near the half-hour mark. His soloing at this relatively early date in his career foreshadows his more recent work. That solo is followed by a drum-percussion dialog between Harris and Sumpa, before the rest of the band rejoins to close things out. Track 2 picks up where the first track ended. The final track features piano, suggesting that Cecil Taylor must have been sitting in on the session as well - the third track definitely has a different feel to it, and quiets things down enough to give Bluiett a chance to be heard. There are definitely some knowledgeable cats who drop by here, so maybe one of 'em will be able to give us the lowdown on the session beyond the fragments that I can provide. 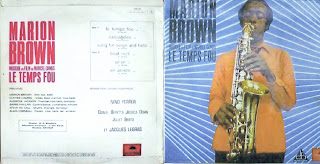 A film soundtrack composed by Marion Brown, with the exception of the track "Cascatelles". It's pretty standard late-1960s Marion Brown - which means if you're a fan, you'll be pleased to find this. The music stands up quite nicely - there aren't any tracks that would qualify as incidental music or filler. The tune "Boat Rock" is a bit of an oddity in that it is more of a rock tune, with jazz instrumentation.

Enjoy another of the jazz underground's grails! 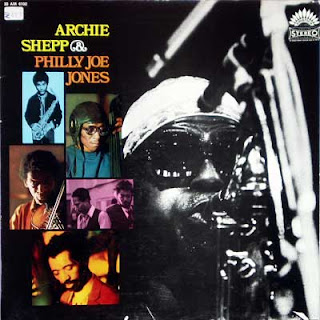 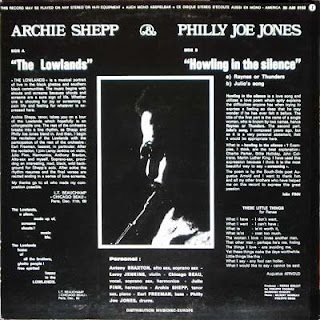 1. Howling In The Silence;

a. Raynes or Thunders
b. Julio's Song

Here's another out of print gem from Archie Shepp's canon. Shepp always seemed to have a deep reverence for the music's history even during his most avant-garde days, and by 1969 the journey was taking him into blues territory (certainly quite apparent on this album and also tracks from another overlooked gem from the time, Blasé).

From the liner notes for the track, "The Lowlands":

"THE LOWLANDS is a musical portrait of live in the black ghettos and southern black communities. The music begins with shouts and screams because shouts and screams are a sure sign of life. Whether one is shouting for joy or screaming in pain life and feeling for whatever is expressed here.

Archie Shepp, tenor, takes you on a tour of the Lowlands which hopefully is an unforgetable one. The rest of the orchestra breaks into a line rhythm, as Shepp and Philly Joe Jones blend in. And then, I begin the recitation of the Lowlands with the participation of the rest of the orchestra: Earl Freeman, bassist, in particular. After the recitation, I join Leroy Jenkins on violin, Julio Finn, Harmonica, Anthony Braxton, Alto-sax and myself, Soprano-sax, providing an interesting, mad, black, wild background for Shepp’s solo. After solos the rhythm resumes and the final verses are recited ending in a series of lone screams.

My thanks go to all who made my composition possible.
- L.T. Beauchamp [my note: aka Chicago Beau]
Paris, December 11th, 1969"

It's fiery music, a bit low-fi, and raw. 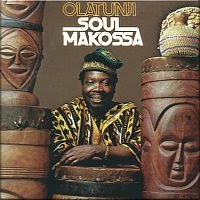 This one's a decidedly funky joint that was dropped in 1973, and which fans of Fela Kuti or of On The Corner-era Miles Davis would enjoy tremendously. I love percussion - there's plenty of it here. "Soul Makossa" is a mid-tempo funk-jazz workout. "Takuta" opens like a track from Drums of Passion - percussion and chanting - but quickly moves into a minimalist funk vibe that wouldn't be at all out of place alongside, say, David Byrne and Brian Eno's My Life in the Bush of Ghosts. The pace slows down a bit for "Masai", which meanders like a river current nearing the delta. "Dominira" opens with a nasty guitar & percussion intro before settling into an almost popish groove. "O-Wa" turns away from pop and closes the album on a note more reminiscent of "Takuta".

This music is a celebration of life, performed by people who seem to enjoy what they are doing and each other's company. For those of us who believed at one point that we could cure the world's social ills by injecting some peace and love into the collective psyche with music, this is the sort of stuff that makes it easy to believe once more. Enjoy! 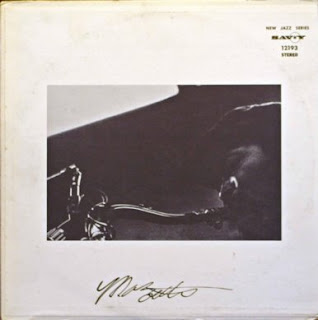 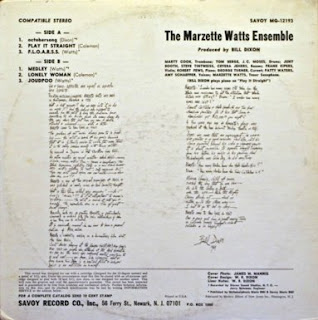 Here's another Holy Grail from the 1960s free jazz scene. Marzette Watts' other album, Marzette and Company (recorded for ESP-Disk in 1966, but not released until 1971) goes in and out of print, but is relatively easy to find.

Savoy dropped this eponymous joint in 1969, but never saw fit to reissue it. A shame, because it is a nice slab of vinyl that fits in nicely with much of what ESP-Disk was offering at the time. The recording includes three Watts originals, a couple Ornette Coleman tunes (including the standard, "Lonely Woman") and a Bill Dixon tune. Thurston Moore held this album in high esteem for good reason. It rocks - not as a full-throttle noise assault, but as a varied, subtle recording that kicks out the jams in all the right places. The cover of "Lonely Woman" in particular stands out, partially because of the Patty Waters vocal.

As an aside from the great minds think alike department: when I upped this album in August, I was expecting to be able to post it right away - but that was before some local school board matters hit the fan. I just couldn't get into doing much with music until after all that got settled. Turns out that the cats over at Destination Out upped a sampler of tracks from Marzette Watts Ensemble last week, along with an excellent summary.

I'm assuming that the cat listed as Robert Fews is actually Bobby Few.