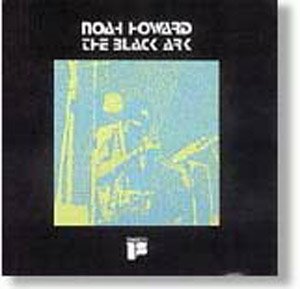 A review (via allmusic.com):

While The Black Ark [sp] is not altogether different than his other records from this period, it presents Howard in a new setting with a number of interesting avant-garde players. On hand for this session are reedman Arthur Doyle, trumpeter Earl Cross, Leslie Waldron on piano, Sirone on bass, Muhammad Ali on drums, and Juma Sultan on conga. There is some mild variation in style among each of these songs' respective heads (from post-Coltrane to hard bop noir), but in all cases they are abandoned rather quickly anyway, so to dwell on such things, it seems, would be a rather moot point. Instead, the widely varying styles of the players themselves are of particular interest. Both Cross and Waldron, not exactly household names, reveal themselves to be quite competent players and tend to be the anchors of the group, in that their solos are often the most grounded of the non-percussion instruments. Doyle, on the other hand, is expectedly outrageous. His solos on this (or any) record never fail to increase a song's intensity level. Otherwise, Sirone and the percussionists are afforded some solo and duet time on the second side, which really accentuates the delay used on Sultan's conga. As a result, when he and Ali are left to themselves, the listener is presented with a very Sun Ra-esque Afro-space sound reminiscent perhaps of the echoed percussion heard on Cosmic Tones for Mental Therapy. Easily recommended for fans of the 1969 BYG/ESP free jazz scene.

Another partial review by Richard Williams of Melody Maker via the liner notes to The Blue Humans' Live - N.Y. 1980 cd:

If it did nothing else, this album would at least introduce to us a couple of extraordinary musicians: trumpeter Earl Cross and tenorist Arthur Doyle.

Cross is post-Norman Howard, the new lyricism with a grainy, throaty tone...(etc.).

Doyle is another matter. This man is dangerous - he never plays anything you could recognize, just furious blasts of rage. His solo on "Domiabra" couldn't be written down, or even sorted out. It sounds more like raw energy than anything I've ever heard. He's nasty, man.

The record as I understand it was first issued on Polydor in 1969 and then later reissued on cd in Japan on the Freedom label. As far as I know it is currently out of print. That Japanese reissue will fetch a pretty penny, to say the least - I rarely see this album at all on ebay, and then never for less than $50.

This record lives up to its reputation. The review pretty well captures the essence as well as any review could. There are plenty of fiery moments to be found, as well as plenty of moments of relative calm (see especially "Ole Negro", where the reeds and trumpet lay out for much of the tune, and let the rhythm section have at it). One of the relatively mellower pieces, "Queen Anne" sounds like something that would fit in on one of Frank Wright's early 1970s albums (not surprising given that the Howard & Wright would gig together quite a bit during first few years during the 1970s). "Mount Fuji" is just wild, from the opening until the finish - even when the horns lay out, the rhythm section maintains the fiery pace. It's an album that should be heard to be fully appreciated. Words cannot do it justice.

The title on the cd I have is The Black Arc - I often see it misspelled "Ark" due to the graphics used on the front cover.

The musicians were mostly unknowns at the time, many of whom remained in obscurity. I honestly don't know what else Earl Cross & Leslie Waldron did either prior to or after this particular recording. Too bad, as both seemed to hold their own nicely throughout the session. Drummer Mohammed Ali was Rashied Ali's lesser-known brother, and appeared on several records with Frank Wright, Bobby Few, Archie Shepp, Alan Shorter, and Albert Ayler during the late 1960s and early 1970s before he dropped out of sight. Where is he now? Percussionist Juma Sultan appeared subsequently on one Archie Shepp album and on several posthumous Jimi Hendrix albums (the ones appearing after the Hendrix estate gained control of his recorded output). Sirone may not exactly be a household name, but is certainly one of the better known of this session's musicians - perhaps best known for his work with the Revolutionary Ensemble as well as leading his own sessions. Sax (and these days multi-instrumentalist) Arthur Doyle managed to gig around, very occasionally appear as a sideman on recording sessions (e.g., Milford Graves' Babi, and as a member of The Blue Humans), and recorded a date as a leader (Alabama Feeling) during the 1970s and early 1980s. Doyle then dropped out of sight and re-emerged seemingly out of nowhere in the mid-1990s (and has since been on a veritable recording and gigging spree).

The tune "Mount Fuji" provided the inspiration for what I suppose could be called an Arthur Doyle standard, "Noah Howard Black Ark" that has appeared on several recent Doyle releases (e.g., Live at the Cooler, and The Basement Tapes).

Wanna find out more of what Noah Howard has been up to? Here's his official website.