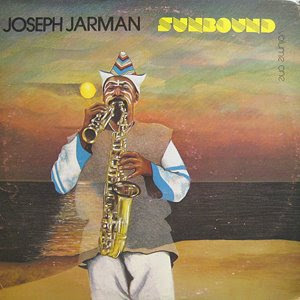 Tracks:
Side A
1. Sunbound
2. Movement for Piano Players on a Break at 1:30 A.M. Saturday Night in a Big City

Sunbound is a live solo performance by then Art Ensemble of Chicago member Joseph Jarman, and one of a handful of recordings issued by the band's own label. The Association for the Advancement of Creative Musicians (AACM) of Chicago had long required a solo concert as a kind of "final exam." Regardless of one's instrument, a graduate of this school was expected to be able to construct a cohesive performance alone, without benefit of supporting musicians. Thus, concerts like this one were hardly uncommon at the time, though to the wider public the idea of a saxophonist by himself on stage was still somewhat bizarre. Jarman has a significantly different approach to improvisation than his erstwhile reeds partner in the Art Ensemble, Roscoe Mitchell. The latter had an extremely structural view of improvisation, using often arcane conceptual ideas as the basis for his flights. Jarman is a more intuitive player, allowing ideas to flow in natural, lyrical fashion, even when blisteringly intense. Typically, he utilizes a wide variety of reeds and percussion, sometimes simultaneously, though the finest work here is on alto ("Universal Mind Force"). His abandonment of structure allows for some degree of meandering, and there are sections which could have stood a bit of editing, but that "excess" was part of the deal in performances such as this at the time and, in retrospect, are even part of their charm. Still, one misses a foil such as Mitchell to bounce ideas off, and the album, while generally enjoyable, lacks some of the depth and passion associated with the best Art Ensemble recordings. Recommended for AACM completists.

This is one I just sort of stumbled on and thought was worth passing along. Jarman does sound like a one-man-band through much of the album, and seems to my admittedly non-expert ears to do quite well at pulling the performance off within the parameters of a solo performance. I tend to like this sort of thing. If you like AEC and/or solo improv performances you may well like this one as well. It's never been reissued on cd as far as I am aware.