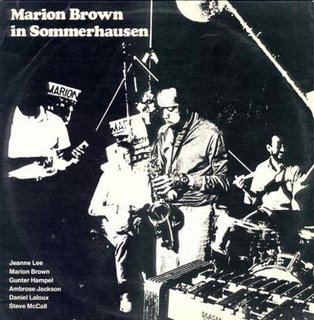 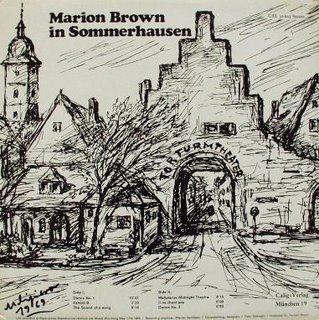 "In Sommerhausen" is Marion in late 60's exploratory fashion and is quite freaky with the vocal whoops of Jeanne Lee.

The first track (Dance No. 1) starts out with percussion before the rest of the group joins in, followed by numerous combinations of percussion/drums and sax or trumpet or vibes. The next tune is "Exhibit B" which features Brown on sax - often breathing and moaning through the instrument giving the piece a cathartic quality. "The Sound of a Song" has an almost tranquil feel by comparison as the group improvises together. Jeanne Lee makes a vocal appearance on this one (no words, very soothing). Vibes are featured very prominently. "Malipieros Midnight Theatre" immediately shakes things up with a chaotic group effort employing a lot of what would be called "little instruments" (e.g., whistles) as AEC would call them, as Jeanne Lee recites a spoken word piece (sometimes mumbled, sometimes clearly) that has a rather paranoid quality to it, and later in the piece goes into those vocal whoops that Moore describes. "Il Ne Chant Pas" begins with a charge on trumpet & drums, and male vocals in French sounding very shrill & excited (more vocal whoops). "Dance No. 2" rounds out the gig as a reprise of the beginning theme, even more percussive this time around.

This is a hard album to track down. Many thanks to whoever ripped this one from vinyl. One of my favorites.