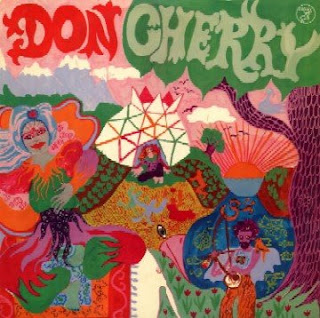 Here's another artist whose work I've grooved on for a long time - at least since I stumbled upon his contributions to various tracks on an ECM sampler that my parents unloaded on me back in 1980. That ECM sampler (Music for 58 Musicians) offered examples of Don Cherry in both world fusion (Codona) and free jazz (Old and New Dreams, which covered Ornette Coleman tunes) settings. I tend to gravitate toward his world fusion recordings, and this out-of-print gem is a personal favorite.

Here's the lowdown (via this Don Cherry discography):

The tracks and times I list are as found on the mp3s that I've found floating around the Internet tubes - otherwise, all information regarding the the tracks and their composers (and whether the recordings were in stereo or mono) are as presented in the discography. Expect plenty of percussion, chanting, singing, and non-Western jazz instrumentation. A lot of "world music" or "worldbeat" got a bad name for being bland, lowest-common-denominator pabulum, but I can guarantee that much of what Cherry was recording sounded (and still sounds) quite engaging and experimental. Given the circumstances in which this album was recorded - i.e., varied times, locations, and recording conditions - the sound is strikingly coherent throughout. Only the sound quality of Resa (the last track) seems dodgy. The first four tracks have the least in common with what we would normally consider jazz. The last three tracks mix non-Western instrumentation and ideas with instrumentation more typical of an avant-garde jazz performance. Very spirited and spiritual music. Don Cherry would later collaborate with Nana Vasconcelos on several Codona albums, and with Bengt Berger for the album Bitter Funeral Beer.