Pharoah Sanders: Live at the East 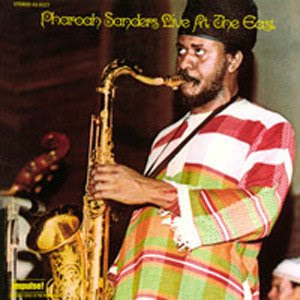 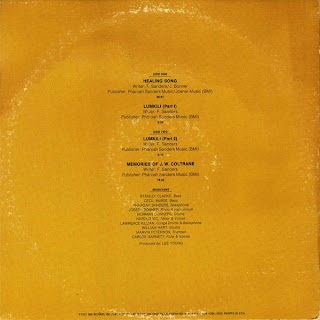 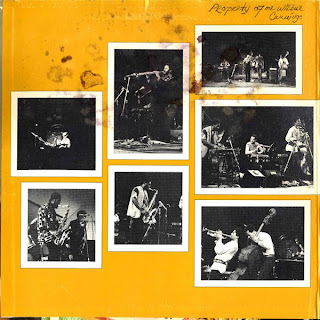 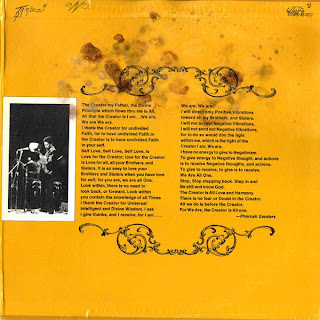 The work of Pharoah Sanders seemed fitting for a 100th post. Live at the East is one of several albums from Sanders' Impulse! days that has yet to see a proper reissue in the US (an effort to reissue the Impulse! back catalogue was aborted at the end of the 1990s). It's a bit of a shame really, as the music on this album is nothing short of stunning. It's been a couple years since anyone in blogtopia posted Live at the East (see Orgy in Rhythm, who provides some excellent commentary), so I figure the time is ripe for a new upload. I came by my first set of mp3 files for this album on the old Napster - the sound quality was dodgy, but after reading so many tantalizing descriptions of the album, I was just thankful to have the opportunity to hear the tunes at all. The sound files I'm providing here are considerably higher quality - I found them on Soulseek about four years ago. "Healing Song" takes up much of the first side of the original LP, opening with the lush sound of piano, percussion, and voice over which Sanders offers up a lilting melody before letting loose. The piece is very free, but never overwhelming, instead lulling the listener into a near-meditative state before reaching its climax. Bassists Cecil McBee and Stanley Clarke get to showcase their mad skillz about five or so minutes into the piece, setting a fairly funky pace for the rest of the performers. Since Joe Bonner co-wrote the piece, it's not too surprising that his piano work is front and center. "Lumkili" starts out with a similar sax line that began the first piece, but goes in a somewhat different direction - the warm sounds he offers up would not seem out of place on, say, some of his later albums like Journey to the One. After that rather laid-back tune, the session closes with "Memories of J. W. Coltrane" which goes for a monastic vibe: the gentle bells, gong, harmonium, bailophone, and bass provide a drone over which the vocalists slowly chant. Given the spiritual direction of John and Alice Coltrane toward the end of John's life, this seems like a fitting tribute to a great artist and mentor. Here, Sanders' sax serves merely as another chanting voice - almost Tibetan on the occasions when it briefly appears.