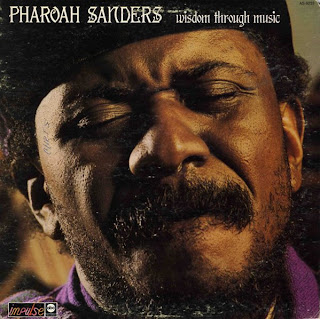 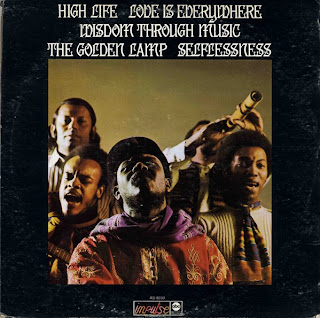 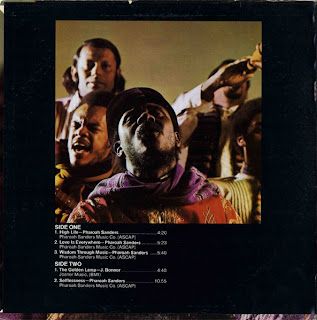 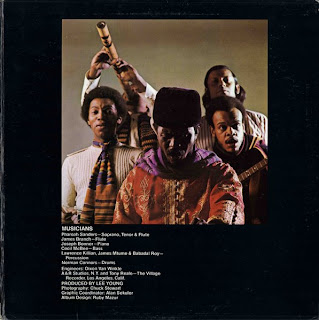 Another gem from Pharoah Sanders' Impulse! days. What I'm sharing is the album as it's circulated around the usual p2p sources. Sound quality should be pretty decent, but beware that the track "Love is Everywhere" that I have seems to be cut short - over two minutes seem to be missing. I've also corrected a couple errors ("High Life" and "Wisdom Through Music" seem to have been mislabeled) [Thanks to a comment, those errors are no longer an issue - see new link at the end of this post]. Regrettably I have no access to the original album, but maybe someone here will be able to rip a better set of mp3s. The celebratory "High Life" is Sanders' interpretation of the West African style of music by that name - a style that Sanders would revisit from time to time during his career. "Love is Everywhere" is an abbreviated version of the extended track appearing on the album Love in Us All. The title track is a slow moving meditative drone with plenty of Badal Roy's tabla playing. There seems to be some uncredited vocal and kora playing on "Golden Lamp" - a tune that has an almost folky feel to it. The final track starts out as a slow predominantly vocal hymn that eventually gets cooking - some very spirited, fast-paced free-form instrumental jamming. Roy's presence contributes a distinctly South Asian feel to the tracks appearing after "High Life."

Interesting bit of trivia: flutist James Branch is also known as James "Plunky" Branch - the guiding spirit behind the legendary 1970s jazz combo Juju and Oneness of Juju (a band that is still alive and kicking in one form or another). Tabla player Badal Roy and percussionist Mtume played together in Miles Davis' touring and studio band in the early 1970s.