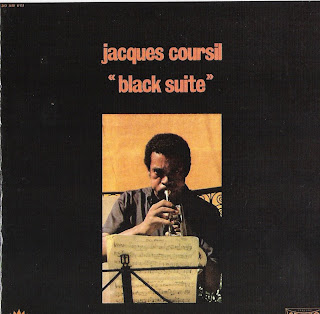 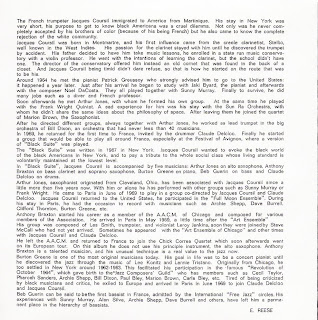 This amazing trumpeter led two album sessions for BYG, both highly respected projects. This might be the one to take off to the desert island, as the presence of Anthony Braxton as part of the band really makes for an intoxicating brew, if abstract free jazz is the cup of tea on order. Braxton is just fantastic in a collaboratory role, cutting loose with even more of an edge than when leading the band and adding texture with his contrabass clarinet that brings to mind the fog rolling into the forest right before the scene where the villagers storm the evil castle. Arthur Jones cuts loose on alto sax in the manner that makes all his appearances on this label so delightful -- fiery, full of spirit, always an exciting presence. As kind of the lost voice of the trumpet in modern jazz, Coursil is not only a great discovery for the modern jazz fan, but a fine creative vintage that holds up to repeat visits over the years. His control of the difficult horn and totally original melodic thinking really makes his playing stand out among the admittedly thin ranks of avant-garde trumpet players. None of the players who have Coursil's technical mastery play with as much heart and soul. He also proves himself a great bandleader, passing some of the key tests of this distinction with the music featured on this album. One composition after which the record has been titled takes up the entire slab of vinyl, clocking in at a bit over a half-an-hour. Only a good bandleader can pull off an epic of this sort, and only a good bandleader can pull together a rhythm section that on paper promises the excitement of the local newsboys sitting in. The French bassist and drummer featured here were this label's Grade Z rhythm section, and sound better playing quietly than they do when hitting loudly. That's because of the recording, which distorts the drums and bass after a certain level of attack. On the other hand, the quiet sections are not picked up as well by the microphones -- assuming there were microphones -- and, as a result, the horns have even more room to maneuver. Let's allow the artist to serve as his own critic in the case of pianist Burton Greene, who would later publicly dismiss all of his playing from this era as being claptrap. Like another much more famous and prolific modern jazz trumpeter and bandleader, Coursil takes even questionable music contributions, such as the entire existence of this rhythm section, and turns it into a highly useful musical function. Jazz scholars who feel rhythm sections are unimportant can, of course, gloat over the musical success of this particular album. At any rate, it is one of the best examples of just how beautiful modern jazz can be.

The music is a continuous piece broken into two parts due to the necessary constraints of the old vinyl LP format. There's not much I can add to the Chadbourne's review. Suffice it to say that music on this recording lives up to the hype. It's not a noisefest (as free jazz is often stereotyped), but rather the emotional intensity gets expressed through the open spaces and abundant quiet passages. Highly recommended for fans of Arthur Jones' recordings Scorpio and Africanasia.