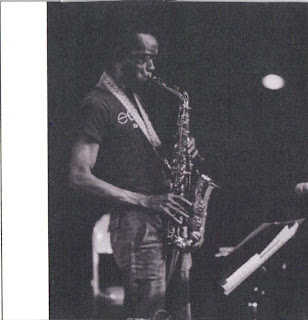 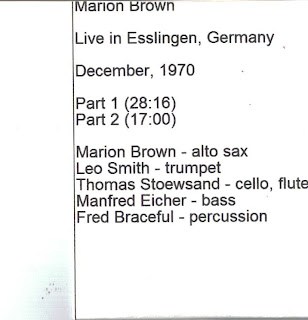 It's been a little while since I posted any Marion Brown recorded material, so I thought I'd hook you up with a live bootleg recording that I happened upon about three or four years ago. The sound on this live bootleg should serve as a bridge between Brown's live recordings from around 1968 or 1969 (as well as the album Porto Nova), and his ECM release Afternoon of a Georgia Faun and his duets recordings during the early 1970s. In fact, those latter releases are arguably quite similar to what you'll find here with this quintet. The ECM connection should be apparent not only from the basic approach this particular combo takes, but from the personnel list: ECM founder Manfred Eicher plays bass on this session. Expect a fairly minimalistic soundscape, "little instruments", and plenty of open spaces. In other words, don't expect a noisefest, but don't expect easy listening. Brown's music, no matter how spare, refuses to stay in the background. It's also a pleasure to hear a young Wadada Leo Smith on trumpet. Marion Brown fans will want this.

Tracks:
Note that although the track listing consists of a part A and B, on the CD I have, it simply appears as a single continuous improvised piece, running 46 minutes.