Wendell Harrison and the Tribe: An Evening With the Devil 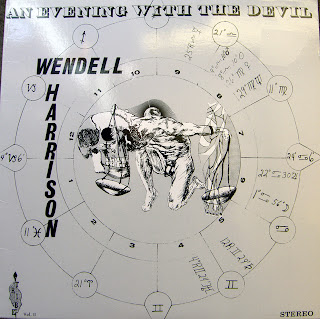 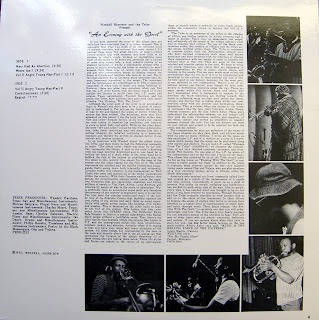 The liner notes (any typos are likely mine):

If you have observed the cover of this album then you definetely have concluded that it is rather unusual. This is specially true when you think of all the different kinds of designs, sketches and pictures that most record L.P.'s portray these days. The great majority of today´s record covers usually deal to very little or no relation to what's inside. Instead of spotlighting some facet of the music to be heard you generally get a picture of some sexy young lady, a very colorful picture of an abstract painting or maybe a psychadelic setting with a group of people displaying the latest in women's or men's apparel. Now these types of covers may look attractive and are nice conversation pieces to display around the house to friends and relatives who drop by to visit. But in the final analysis we, as listeners, must remember that the most important ingredient is the music. The musicians and the instruments are subordinate to it. This is apparent regardless of what type of music you enjoy listening to. However, there are some rare occasions when you find that the L.P. cover blends with the music inside of it and enables the listener to profit from that L.P. inside and outside. Tenor saxophonist, Wendell Harrison and his group, the Tribe, have achieved that goal with their latest offering "An Evening With The Devil".

Although the outer part of the cover is an astrological chart of Wendell you don't have to be a student of astrology to understand it. For you see my friends the struggle of man to try and balance the scales of justice within his society has been evident, like astrology, since man first appeared. I use the term justice rather than "law and order" because justice, in my mind´s eye, stands for man trying to improve his conditions and continue to grow in mind, body and spirit. While on the other hand, the term "law and order" coined by the Nixon administration, talks about restricting man and placing him into a setting whereby his behavior conforms to a particular standard and thereby his growth is stopped before it can nourish and develop properly.

In an enterview with Wendell about the album cover, the Tribe, and their music he has the following comments to make. "The album cover which was done by my wife Pat, represents two things. A man in the nude is kneeling with his head pointing downward and in one hand he is holding the head of a skull, while in the other hand he is holding the foot of the system or establishment that we live under in this country. One stands for the head of the system and the other stands for the foot of it. The skull represents the intellect and the skillful intellectual propaganda that's going down both internally and externally. Included in this category is the businessman on Wall Street who owns and operate all of the major corporations within the country. With their finances and influence they dictate the governmental policies which create the negative vibrations that are opressing, disabling, and killing millions of people in Viet Nam, Africa, Latin America, and America by means of war in the name of democracy. War is profitable from an economical stand point and therefore the economy of the country is dependent upon it to survive. You also have the cunning intellectual ways of the law, by way of its Supreme Courts that legislate against the true rights of the people and deny them an equal opportunity with smoke screen issues like housing, civil rights and busing. This is balanced on the other hand or scale by the foot of the system. This brings into play your police forces like STRESS (Stop The Robberies Enjoy Safe Streets) in Detroit, a special detachment, who harass black people without a justifiable cause. Then there's the total ripoffs that hapens within the prisions like Attica in N.Y. and the underground things like dope, prostitution, numbers racket and abortion. Actually what it is saying is that you have your upper and lower structure of the system. All these things are represented by the man in the nude and directly above him is the all-seeing eye that symbolizes the Creator of the planet observing all of these things that are taking place below. These life styles and forces are placed in the center of an astrological chart of myself wich is symbolic of every black person within the community trying to balance this hell of a monster.

"The Tribe is an extension of the tribes in the villages of Africa, our mother country. In Africa everyone had a talent to display. There were no superstars: just people and collectively all the people of the village played a vital role in shaping that culture. We see all black communities within this country as villages and the tribes are the people residing within them. The Tribe is composed of creative artists from the Metropolitan Detroit area who have travelled extensively with many well known musicians and have returned with the intention of sharing these experiences with our people in order to broaden the cultural base in this city. They are some of the most original and creative artists in the area. We hope to bring out points, situations and events that are happening in our communities by way of music, poetry, dance and rapping to the people. You see pure music must reflect the environment that we live in if it is to be educational and beneficial to our culture. It must portray our way of life. At this point in our history, harmony for the most part, is not reflected in our communities. There's a lot of rebellious tension and discord, even though we have some groovy or harmonious moments along the way. There are many people within this society, black and white, who don't understand what is happening in regards to the direction the black musicians are moving toward. Our music is reflecting more so than ever before the stress, tension and discord that is taking places within our communities along with the positive and harmonious things happening. This is evident when one listens to the music of composers like the late John Coltrane, Archie Shepp, Ornette Coleman and the late Albert Ayler. These guys understand the relationship between art and culture and they took the total vibrations, positive and negative, of the whole culture and served as amplifiers or speaker systems through the arts. You can not divorce art from its root culture and expect it to be relevant for both the artist and his culture.

"The compositions we play are reflective of the music of our times whereby we play Jazz, Funk and African music with its poly or many rhythms. I wrote all the tunes in this particular L.P. and it is written as a suite of 5 movements wich means that the music can be performed along with poetry and dancers. On our last L.P. 'Message From The Tribe', we featured the compositions of our very talented composer, arranger and trombonist Phil Ranelin. On one side of the L.P. he wrote all the compositions and on the flipside I wrote all the tunes. This album was produced by us on the Tribe record label. As far as the music in 'Evening With The Devil' is concerned it really speaks for itself. In addition to the music it features some relevant poetry by two very talented young poets named Oba and Vajava who are also members of a very excellent theater group in Detroit called the Black Messengers."

America's only original art form, commonly called Jazz, was created as a result of the enslavment of a people and their culture. Consequently it grew up as a child of poverty. Not unlike its people, suffering and indifference has marked its path every step of the way. Like its people, every time it has reached what was thought to be its low point, it has been revived by innovation. Wendell Harrison and the Tribe certainly provides us with another link to add on to the chain of the innovators. In their efforts to balance the scales of Justice they strive to elevate their listeners to a higher level of consciousness in mind, body and spirit through music. Their latest release, "An Evening With The Devil", is certainly one that you will enjoy, appreciate and love. The Tribe has a very heavy message for you beautiful people of the universe to hear. They are men of their times who are aware, concerned, dedicated and serious. If you are serious about what they have in store for you, you had better listen because as the late multi-reedist Albert Ayler once said "MUSIC IS THE HEALING FORCE OF THE UNIVERSE."

I'm pretty sure this has been circulating around the internet tubes for a while. Good music is always worth the additional exposure, and this recording is no exception. Some TRIBE offerings occasionally make their way to reissue (Marcus Belgrave's excellent Gemini comes readily to mind), and if you can purchase any TRIBE reissues, by all means do so.