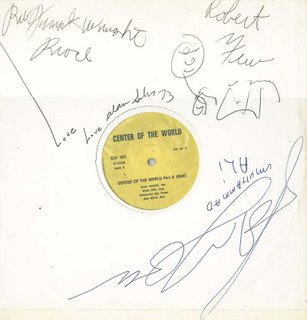 This recording and its companion (Center of the World Vol. 2: Last Polka in Nancy?) are well worth tracking down. Both were reissued toward the end of the last decade on Fractal, and are back to out of print status. If you can find either cd, it'll fetch a premium these days.

Frank Wright Quartet-Center of the World

Originally recorded in 1972 in Rotterdam, this Frank Wright date stands as one of the unsung classics of the free jazz era. For years sought out by collectors at outrageous prices, the folks at Fractal have done us all a favor and reissued the original album on CD with two previously unreleased performances from a reunion date in 1978. Featuring Wright on tenor and bass clarinet, pianist Bobby Few, bassist Alan Silva, and drummer Muhammad Ali (no, not that one), the music captured here is one vast exploratory landscape where anything went and the intensity is blistering. While Wright is the leader of the ensemble and was capable of blowing the hell out of his horn, the true star on these sessions is Few, who joined Steve Lacy's Sextet upon departure from this group. Few doesn't support Wright -- he drives him, pushes him to the limit and causes Silva to seek refuge in Ali's drums. There are vast tonal expanses being explored here, and it's only Few who can map them, from both outside and inside the piano. His use of right-hand arpeggios is stunning considering the size of the chords he's laying out with the left. Far more lyrical than Cecil Taylor, Few pushes the range of Wright's instruments to the very limit of his abilities to play them and then extends them a bit. The title track is almost 40 minutes long and stands as a free jazz endurance test. Wright astonishes for many reasons, not the least of which is his ability to blow at the intensity he does for the entire gig. The 1978 show is more laid-back, and the band makes use of ostinato and other kinds of repetition to create the myth of a tune á la Albert Ayler, especially in "No End." Here Wright plays the insistent "call-to-prayer-and-revelation" honk that Ayler loved so much, and Few works with Silva (who is badly recorded on these two tracks) to bring up an entire battery of responses that shift meter, tone, and, because of the consistency of the phrasing, intervallic shifts and staggers. Throughout, Ali plays his best Elvin Jones, and pulls it off; his are the sticks that usher in the speed of this freight train of movement and fluidity, and he dances the kit with propulsion and true grit. Whatever you do, get this.

Due to file size issues, I've broken this up into two parts. Part one consists of the two sides from the original recording. Part two consists of the bonus tracks included on the cd reissue.