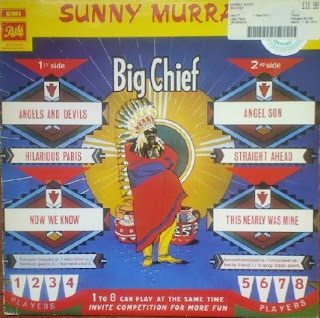 This album starts out with a bang. "Angels and Devils" is pure free jazz cacaphony at its finest, with the fun starting just as soon as the theme is stated and quickly abandoned. "Hilarious Paris" proceeds in a similar manner, this time sticking with the opening theme for the first minute before the collective improv takes over. "Now We Know" puts the sax players in the spotlight, though just barely, as they scream above the rest of the ensemble - followed by an extended solo by Tusques on piano. "Angel Son" takes the volume and tempo down a few notches, but not the intensity. Flute, piano, and violin figure prominently on this piece, that has a dirge-like quality to it. "Straight Ahead" follows on a similar vibe, this time featuring spoken word by Bibbs, and violin, trumpet, and saxes prominent in the mix. The last track, "This Was Nearly Mine" ends the album on a lyrical tip - a free jazz hymnal that one can hum to while listening. Even though Murray doesn't really take any of the spotlight for himself per se, his presence as the drummer and anchor for each tune is always felt.

Some of Sunny Murray's albums are in that hard-to-impossible-to-find category, and Big Chief is one of 'em. Aside from its initial run in 1969, I am under the impression that there has not been a proper reissue of this album. Murray's larger combo albums are quite a ride, so don't miss this one.