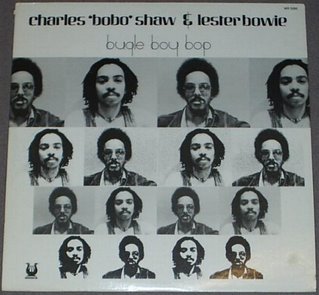 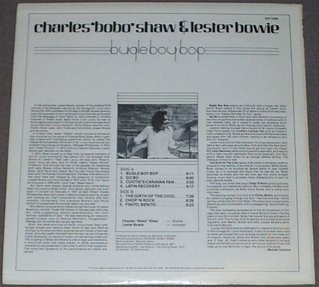 This is a trumpet & drum duet that will please fans of AEC & Human Arts Ensemble. If you are someone who loved Don Cherry & Eddie Blackwell's album Mu, you'll probably like this one.

The title track gets things off to a high-energy start. The second track ("Go Bo") is where Shaw cuts loose & Bowie lays low (at least somewhat). A barnburner. "Cootie's Caravan Fan" slows things down, but just barely, with a pulsating rhythm giving the tune a very trance-like feel. The title "Latin Recovery" is fairly self-explanatory, with Shaw going bossa nova as Bowie freaks out on the trumpet. The flipside starts with what amounts to a free improv ballad "The Girth of the Cool" - slow-tempo late night feel to it, but by mid-song builds in intensity and eventually the duo picks up the pace and the ferocity. "Chop'n Rock" is characterized by a choppy, rockish beat through much of the tune, seemingly nodding to an old AEC tune, "Rock Out". "Finito, Benito" ends the album on an entropic note. Be aware, the mp3s on this one are a bit dodgy, and the last tune seems to cut off in the middle. As the saying goes, better dodgy mp3s than no music at all.

I don't know if there ever will be a proper digital reissue of this album. Maybe I'll be pleasantly surprised. In the meantime, these mp3 files help to document just a bit of what was going on during the late 1970s NY jazz loft scene.