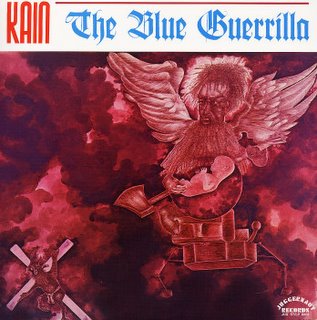 This solo album by Gylan Kain, one of the original Last Poets -- before the group recorded for Douglas Records -- is a study in angry poetics, performance art, and killer presentation. Recorded and issued in the early '70s, The Blue Guerrilla is a freestyle set before such a thing was even a dream. Kain's one pissed-off cat, raging not only against the usual necessary concerns, but also against the stereotypes in his own community. Free jazz-funk grooves on guitars, electric violins, a slew of drums, and ghostly keyboards accompany his gorgeous and disturbing ranting that is far from pointless. From the opening ritual scarification of "I Ain't Black," with it's free jazz approach and over-the-top screaming, to the poignant indictment of "Harlem Preacher," to "Black Satin Amazon" and "Constipated Monkey," Kain is a hipster without a country, a street poet without an audience, an activist without sympathy. And rather than succumb and stylize his thang to get his message across, he becomes angrier, slyer, slicker, less forgiving, and more insightful. Music is placed here not as accompaniment, but as a framework for Kain to place his poetry in a context of the African-American oral tradition and the Living Theatre. And he gives no quarter. This man makes the Last Poets he left behind sound like schoolboys trying to sound pissed off. Kain would make Gil Scott-Heron run away for fear of being exposed as the effete he became before he turned into an out-and-out drug addict. There aren't any other records like this; this is the sound of the apocalypse, one that Amiri Baraka predicted and celebrated. Come to The System of Dante's Hell as narrated by Kain. Sit down, listen all the way though if you can; wake up. There's a riot goin' on.

The album, to say the least, is an intense listening experience performed by a cat who must be one intense individual. Jurek does a decent job of capturing the essence of Kain's one solo album. The music and words fit in with what his former Last Poets crew were doing at the time, although with more attention paid to musical arrangements - ranging from free jazz on the opening tracks to a cooler West Coast feel for much of the remaining album (though cooler here is only a relative term - the music has an edge to it).

To me the highlight of the album is the final track, "Look Out for the Blue Guerrilla." The tune starts out with a basic keyboard-bass-drum backing that has that hazy weed-smoke-filled room vibe to it as Kain drops these philosophical rhymes that build in intensity and religious imagery, with a travel-logue that sounds like Kain's been channeling HST as he was writing Fear and Loathing in Las Vegas, or Oscar Zeta Acosta's Autobiography of a Brown Buffalo. Certainly, the song, like Thompson's and Acosta's books, captures the rotten core of the "American Dream" - in Kain's case, laying out a vision of an America with machine guns on every corner, and ending with a climax in which Kain and crew shout a warning to "Look Out For The Blue Guerrilla!"

If you can dig on some Amiri Baraka-inspired second generation beat poetry, that takes on issues of racism and oppression that are every bit as topical today as they were back in 1971, this album's for you. Last Poets fans should dig this. I've heard his work described as “Holy Roller Existential Blues” and “Poetic Aggression”. That's as good a description as any.

Gylan Kain has kept busy since his falling out with the Last Poets and the recording of The Blue Guerrilla as a playwright, multimedia collaborations with Z'ev, and of course performing his poetry both solo and with musical backing. He's most recently appeared with jazz/hip-hop/fusion artists Electric Barbarian since 2003, appearing on their 2004 album él. and Minirock from the Sun. Some press reviews from the Electric Barbarian website:

JAZZTIMES March 18, 2005 - Larry Appelbaum
Dutch Jazz Meeting
"Friday night began with a sound collective called Electric Barbarian, with electric bassist and leader Floris Vermeulen, and featuring a headphone-wearing trumpeter who kept one hand on his mixer, a turntablist named Grazzhoppa and a drummer prone to mock bodybuilder poses. After an opening instrumental with washes of sound and a pseudo tribal beat, Gylan Kain, one of the founding members of the Last Poets, wailed and ranted his piece about "My Niggaz" with textured accompaniment. At one point he came out into the audience and recited in the face of an audience member who was moved to get up and leave, but not before Kain followed the poor man up the aisle. "Kicking Mickey Mouse in his house", indeed."

Kwadratuur.be August 2, 2004 - Koen van Meel
"These songs are solidly driven on a simple harmonious basis and are underlayed by Floris Vermeulen's melodious bass, which gives the whole thing soul." (...) "Vocal contributions are laid on top of this instrumental foundation. Kain is especially fascinating. His poems are visual, difficult to pin down in the beginning, but are delivered as pure spoken word, with a flow which most MCs can only dream of."

Gylan Kain is in my opinion one of those writers and artists who deserves far more recognition than he's received. The recorded material he's contributed to Electric Barbarian's albums this decade (along with accounts of his performances at their gigs) has certainly been tantalizing. Given the dearth of recorded material available by Gylan Kain, that he's had any influence on the subsequent direction of underground rap is a minor miracle. Some of the more direct evidence comes from KMD's magnum opus, Bl_ck B_st_rds (maybe one of these days I'll re-up that one). In the meantime, "look out for the Blue Guerrilla."