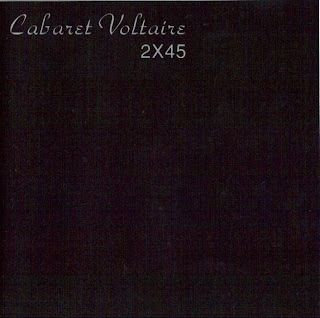 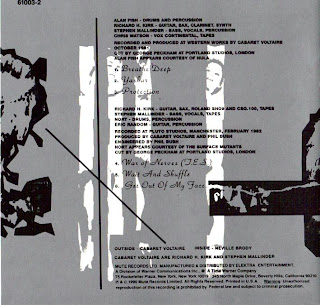 I first learned about Cabaret Voltaire in the mid-1980s, when their videos to such tracks as "Kino" and "Do Right" were still fresh. By that point, the Cabs were a duo consisting of Steve Mallinder and Richard Kirk (Chris Watson was gone by the end of 1981), and their singles were mostly industrial dance tracks intended for rotation in clubland - and they managed some minor hits in their day. Of course even their hits were a bit too left-field to be accused of sounding mainstream. Before then, the band was known for their abrasive electronic experimentation. 2X45 finds the Cabs in transition between their past, when their only intention was to piss their audience off, and what would be their future. The album was recorded over two sessions with somewhat different lineups: one from October 1981 and the other from February 1982.

The sound will please fans of the No Wave scene to no end - it's dark, paranoid, angular, and downright funky. The Cabs' influences were varied, ranging from the minimalism of Steve Reich, ambient music of Brian Eno, the funk that made James Brown famous, and On the Corner-era Miles Davis. I've always dug on the first two tracks especially. "Breathe Deep" sounds like a tune ideal for some postpunk blaxploitation flick soundtrack. "Yashar" has some pretty interesting percussion and tape loops.