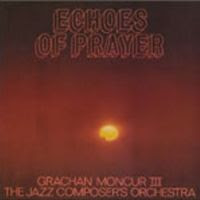 A review from allmusic.com:

Trombonist Grachan Moncur, one of the unsung heroes of the avant-garde, has recorded far too infrequently as a leader through the years. This obscure LP, his fourth major project, preceded a long period in obscurity. The Jazz Composers Orchestra commissioned the lengthy four-movement piece "Echoes of Prayer" from Moncur, and the all-star orchestra performs the work with its composer. Among the soloists during the many sections are Moncur, altoist Carlos Ward, both Cecil McBee and Charlie Haden on basses, Pat Patrick on flute, trumpeter Marvin Hannibal Peterson, violinist Leroy Jenkins and clarinetist Perry Robinson. Also on the album are a dance ensemble (who play percussion) and the voices of Jeanne Lee and Mervine Grady. The music is quite advanced, sometimes pretty dense, and will take a few listens to fully digest.

Probably the most accessible track on the album is Angela's Angel 1, followed by Right On 1 (which begins with the theme initially stated on Angela's Angel 1) and Right On 3 (which reprises Angela's Angel near the middle portion of the track). His work as a band leader on the Blue Note label during the 1960s (as well as a sideman for Jackie McLean's classic Blue Note recordings during the early to mid 1960s), and BYG around 1969-1970 were routinely excellent, and this album is no exception. It's a shame that this has yet to see a proper reissue.